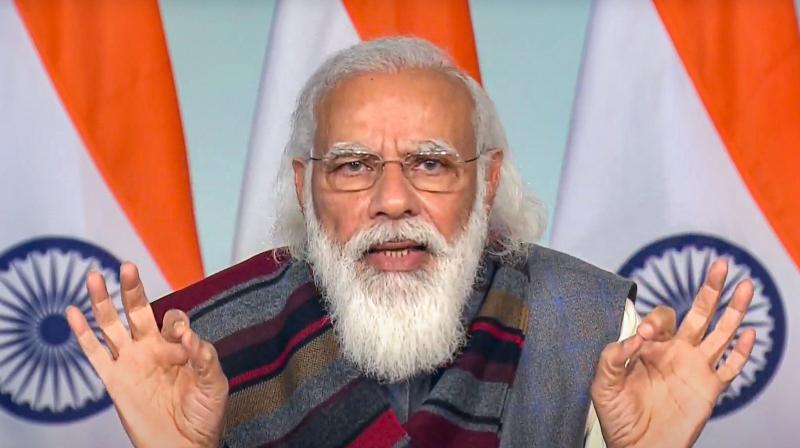 New Delhi/Bhopal: Prime Minister Narendra Modi launched a scathing attack on the Opposition for “peddling lies” to mislead farmers on the new agricultural reform laws, which have triggered nationwide protests, and said he was ready “with folded hands” to “discuss every issue” with the farmers and allay their fears.

Addressing a “kisan sammelan” (farmers’ conference) at Raisen, Madhya Pradesh, via video-conferencing on Friday, the PM claimed the measures were discussed by every government over the past two decades, and that the talk about Minimum Support Price (MSP) ending with the new laws “is the biggest lie ever”.

“These laws were not brought in overnight. In the past 22 years, every government, every state has discussed these in detail. Farmers’ groups, agricultural experts, economists, scientists and progressive farmers have called for reforms. Parties opposing these laws today promised these reforms in their manifestos,” Modi said.

“If anyone has any concerns, then with our heads bowed and our hands folded, with humility, we are willing to discuss with them and assuage their fears,” he added.

“The (Opposition) parties are pained today. They are asking themselves how Modi could achieve what they couldn’t do in all this time. They are worried Modi will get credit. My reply to them is -- you keep the credit. I don’t want credit. I only want farmers’ lives to improve. Stop misleading the farmers.”

The PM has in most of his recent speeches tried to explain that the laws brought by his government are for the farmers’ good. But on Friday, he addressed the farmers directly as part of his government’s big outreach amid protests on the highways near Delhi by thousands of farmers. A number of senior ministers are part of this outreach.

Emphasising the need for reforms, Mr Modi said Indian farmers should not lag behind the world in facilities. “Today I want to expose those who have absolutely no care or genuine concern for you -- our annadaata (farmers). I want to caution all those who are being misled, instigated in the name of these farm laws,” he added.

Modi said the “three biggest lies” spread by the Opposition parties were that the new farm laws would pave way for discontinuance of the existing system of minimum support prices; closure of “mandis” and the loss of agricultural lands due to the contract farming provision.

The PM said the MSP system would never be done away with. “Had we considered abolishing the MSP system, we would not have implemented the recommendations of the Swaminathan Commission. In fact, the MSP of different foodgrains has undergone upward revision by 1.5 times by the present NDA government at the Centre”, he said.

Regarding the fears about the contract farming provision, he said it was not new and the contract farming system has been prevalent for long. “The Punjab government has recently celebrated the agreements for farming contracts worth Rs 80 crores entered by farmers in the state”, he added.