A corporation worker near Marina said that it would be a hectic work for them to clean the beach. 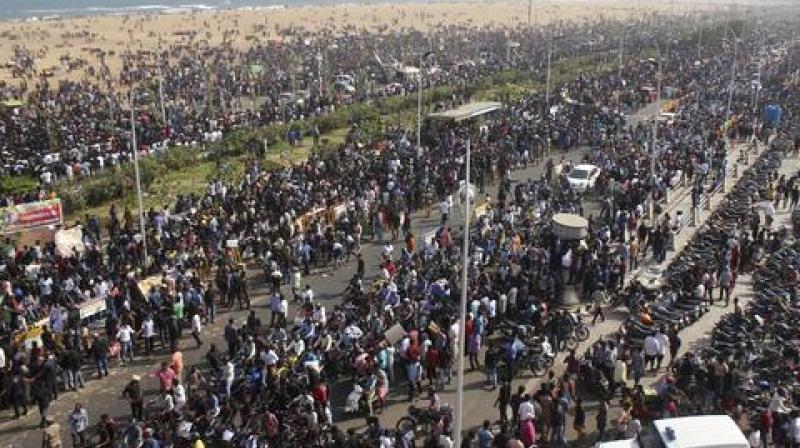 Protestors gather at Marina beach demanding a ban be lifted on the traditional sport of bull-taming, or Jallikattu, in Chennai. (Photo: AP)

Chennai: As thousands of people gather at Marina beach to support Jallikattu, some volunteers are spending their nights in the beach, ensuring that some of the massive amount of litter is cleared up.

Green activist Abdul Ghani K, along with his group of volunteers, has been playing his part in trying to contain waste at the beach to a minimum level.

“Since it is crowded during the day, for the past two days, we have been cleaning the beach at midnight and early morning. The waste is collected and kept together in sacks so that the beach remains clean to an extent,” he told this newspaper.

Kannum Pongal had already left the beaches dumped with the waste and at Marina, the protest has worsened the situation.

Ilavarasan V, a student of SRM University, said, “The demonstrators at the beach are in lakhs and the dustbins are not even a hundred in number. The garbage left over at the end of the protest will be a severe problem later. So, we decided to clean it ourselves.”

A corporation worker near Marina said that it would be a hectic work for them to clean the beach. They are refraining from clean up of the beach, as it would again be in the same shape after a few hours.

Youngsters in the hot sun and at night are taking turns to collect trash, including wrappers, poly bags, covers, water packets, water bottles, and food packets.

Every college group participating in the protest has a group of volunteers who pick up the dropped waste in the area. The garbage is then collected in sacks and kept near the dustbins, for corporation workers to collect it.

Lokesh S., a student of RMK College, clearing the area near Kannagi Salai told this newspaper, “We are supporting Jallikattu but not at the cost of making the beach unclean. We are collecting the garbage we throw, from roads till the beach line. Marina is our pride, ensuring cleanliness is our responsibility.”