India   All India  20 Jan 2017  Decision on Jallikattu issue in couple of days: Govt
India, All India

Decision on Jallikattu issue in couple of days: Govt

'By today evening or tomorrow, we will able to reach some conclusion on the Jallikattu issue,' said Environment Minister Anil Dave. 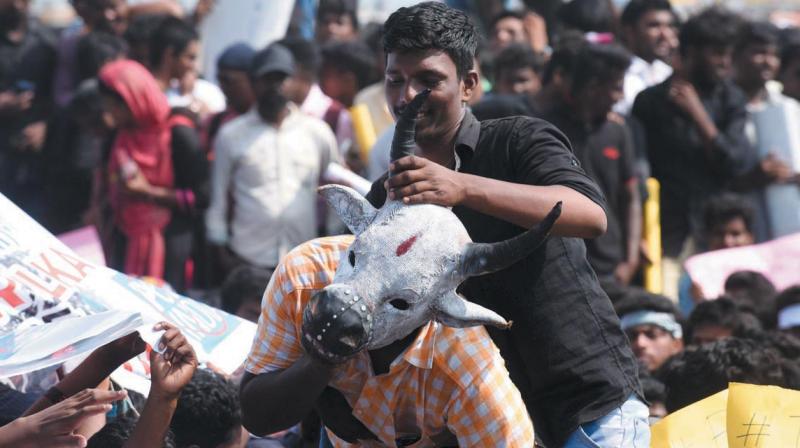 Students protest against the ban on Jallikattu at Marina Beach in Chennai. (Photo: AFP)

New Delhi: The Centre wants a "permanent" solution to the Jallikattu issue and the proposal submitted by the Tamil Nadu government is being vetted by various ministries after which a final decision will be taken within a "day or two", Environment Minister Anil Madhav Dave said on Friday.

"Today the Home Minister has received a proposal from Tamil Nadu government. The entire proposal is under consideration. Different ministries are giving a thought to it. The paper is on way to the Environment Ministry. I am sure within the shortest time we will be able to reach on the final decision," he told reporters.

He said that during the meeting of Tamil Nadu Chief Minister O Panneerselvam with Prime Minister on Thursday, the latter had appreciated the sentiments and cultural values of different cultural sports particularly Jallikattu.

Appreciating the patience of people of the state and the way the entire movement for Jallikattu is being carried forward in a peaceful way, Dave said that the entire process should be done in a "thorough" manner and there should be no "lacuna".

Asked whether the Ministry is also thinking of excluding bulls from the list of animals prohibited from being exhibited or trained as performing animals, Dave said, "If (I) tell you everything now, what will be left for later."

"Paper (TN government proposal) is on way. The moment it will come, within the shortest time, it will be sent back to the Home Ministry (from our side). We are ready for that," he said.

"By today evening or tomorrow, we will able to reach on some conclusion where we can have concrete structure in front of the Jallikattu lovers... Everything should be done constructively. Half heartedly it should not be done. We will be able to bring everything in front of you in the shortest possible time," he said.

Asked whether the Environment Ministry will amend the Prevention of Cruelty to Animals Act, Dave said that he had kept "all the cards close to him".

"We have waited for so long. Let us wait for a couple of days. Half picture or some curtain raiser may not lead to success. There must be proper protection of the cultural values of TN people and we are there with them. We are looking at a permanent solution," he said.

Without naming anybody, he, however, blamed the previous UPA government for including bulls in the list of animals prohibited from being exhibited or trained as performing animals.

"Nothing would have happened if in 2011 somebody had not put the name of bulls in the list of performing animals. We would not have been sitting here. It all started in 2011. That created the whole problem. Those who are asking xyz questions, they should know where they were at different moments," he said.