The chief minister said that the people of Dharamsala would now benefit from the decision. 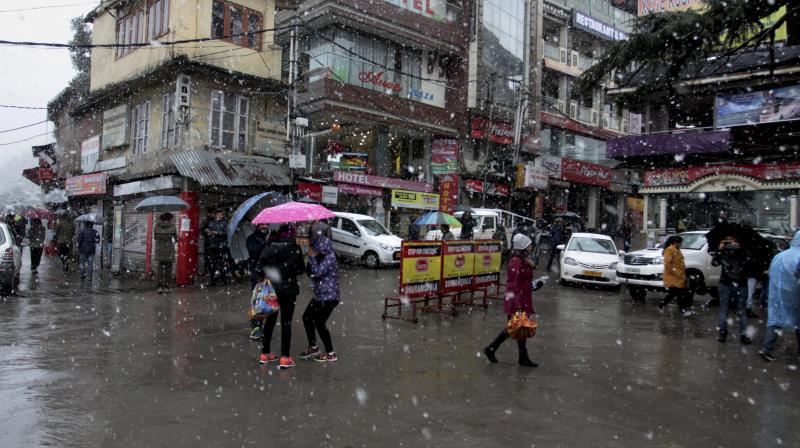 Tourist enjoy the first snowfall of the year at Mcleodganj in Dharamshala. (Photo: PTI)

Shimla/Dharamsala: In a sudden move ahead of Assembly polls later this year, Himachal Pradesh Chief Minister Virbharda Singh today announced Dharamsala as the second capital of the tiny hill state with a population of about 70 lakhs.

The chief minister, who was on a visit to lower hills of Himachal Pradesh, said in Dharamsala, "Dharamsala nestling in the lap of majestic snow-clad Dhauladhar ranges has a significance and history of its own and fully deserved to be the second capital of the state."

The announcement is significant as 25 out of 68 Assembly seats fall in Kangra, Una and Hamirpur districts, and Dharamsala was important for lower areas of Himachal Pradesh including Kangra, Chamba, Hamirpur and Una districts.

The chief minister said that the people of these areas would now benefit from the decision and that they would not be required to travel long distances to come to Shimla for their works.

Dharamsala already figured prominently in national and international map due to its significance owing to many reasons including religious, natural and adventurous tourism and also being abode of Tibetan Spiritual head Dalai Lama.

The chief minister said it was during his earlier term, a full-fledged winter session of the Assembly was held for the first time outside Shimla in December, 2005.

Singh said that he introduced the practice of annual winter sojourn way back in 1994 to hear the people out and see for himself the progress of development works being carried out in the area.

Meanwhile, leaders and people of the region expressed their gratitude towards the chief minister for declaring Dharamsala as the second capital of the state.

They said it was a historic step for which the people of the region would always remain indebted towards Singh.