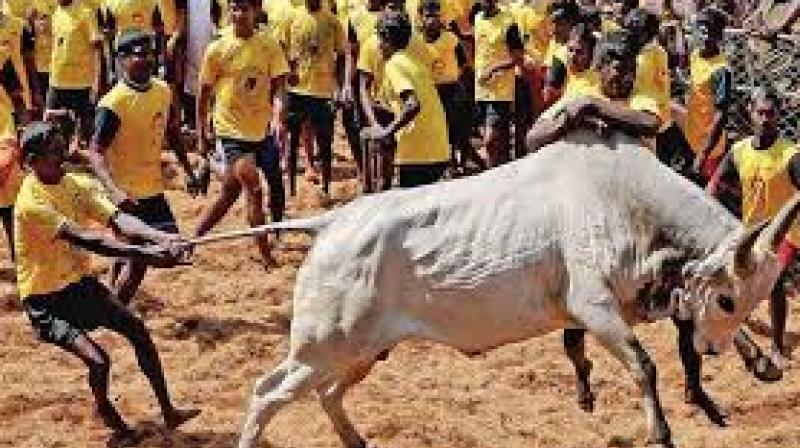 The Environment Ministry earlier on Friday gave its observations on the proposal sent by the Tamil Nadu government for lifting of the ban on bull-taming sport Jallikatu and returned it to the Home Ministry for final decision.

The development came hours after Environment Minister Anil Madhav Dave said that the government wants a "permanent" solution to the Jallikattu issue and a a final decision will be taken within a "day or two".

Dave said that his Ministry was "ready" and would take the "shortest" possible time to sent back the proposal to the Home Ministry after giving its comments.

AIADMK MP M Thambidurai said that Singh assured them that the file will be processed as early as possible so that ordinance can be promulgated in next two-three days.

The Centre wants a "permanent" solution to the Jallikattu issue and the proposal submitted by the Tamil Nadu government is being vetted by various ministries after which a final decision will be taken within a "day or two", Environment Minister Anil Madhav Dave said on Friday.

"Today the Home Minister has received a proposal from Tamil Nadu government. The entire proposal is under consideration. Different ministries are giving a thought to it. The paper is on way to the Environment Ministry. I am sure within the shortest time we will be able to reach on the final decision," he told reporters.

He said that during the meeting of Tamil Nadu Chief Minister O Panneerselvam with Prime Minister on Thursday, the latter had appreciated the sentiments and cultural values of different cultural sports particularly Jallikattu.

Appreciating the patience of people of the state and the way the entire movement for Jallikattu is being carried forward in a peaceful way, Dave said that the entire process should be done in a "thorough" manner and there should be no "lacuna".