Jallikattu: PM tells Tamil Nadu CM ‘we will back you’

Tamil Nadu is gearing up for massive protests and a 12-hour bandh on Friday. 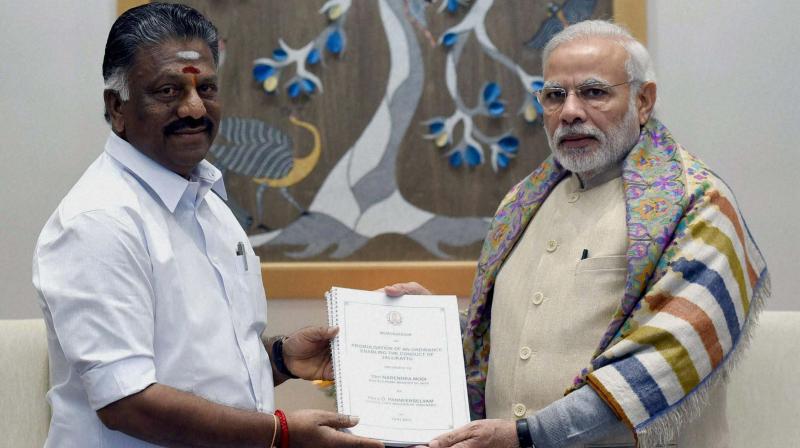 New Delhi/Chennai: While expressing the Centre’s inability to come to Tamil Nadu’s aid in quelling the widespread and escalating protests by promulgating an ordinance to allow the controversial bull-taming sport Jallikattu to take place as the matter is sub judice, Prime Minister Narendra Modi at the same time told chief minister O. Panneerselvam that the Centre would be supportive of the steps taken by the state government.

While it was not clear what steps the Prime Minister was referring to, Mr Panneerselvam, soon after meeting Mr Modi, told reporters, “We will soon take steps with the backing of the Centre for the holding of the sport… All is well that ends well. Wait, good will happen.”

Mr Panneerselvam had rushed to the national capital on Wednesday night and met the Prime Minister on Thursday amid widespread protests across the state over the sensitive issue.

“While appreciating the cultural significance of Jallikattu, the Prime Minister observed that the matter is at present sub judice,” the PMO said after the meeting, and added, “The Centre would be supportive of the steps taken by the state government.”

But Mr Modi’s rejection of the state’s demand for an ordinance on Jallikattu triggered widespread anger in Tamil Nadu, which is gearing up for massive protests and a 12-hour bandh on Friday. Protesting youth blocked trains in several parts of the state and even vowed to return their Aadhaar cards as a sign of declaration that they were no more the citizens of India.

Meanwhile, the Supreme Court on Thursday declined to intervene in the protests on Chennai’s Marina beach. Advocate N. Rajaraman had made an urgent mention before a Bench of Chief Justice J.S. Khehar and Justice D.Y. Chandrachud, saying that the police was harassing the protesters and, in some cases, even denying them access to drinking water.

The CJI, while questioning why he had directly approached the top court, asked the lawyer to move the Madras high court.