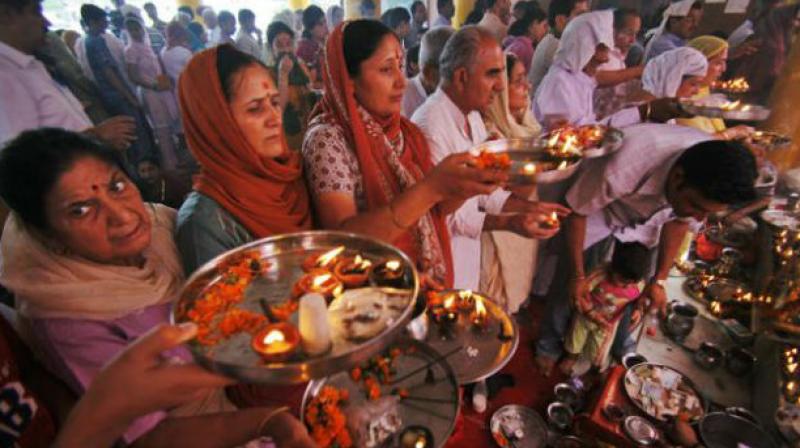 Key separatist leaders had amid this hullaballo announced to set up a committee to hold discussions with Pandit representatives on the issue. (Representational Image)

Srinagar: Jammu and Kashmir government had early last year identified seven places in equal number of districts of the Valley to set up separate clusters for displaced Kashmiri Pandits and soon started work on ground despite stiff opposition from separatists and even a few mainstream political parties. Also, some Pandit outfits and activists publicly voiced their concern over the preference of the PDP-BJP government as they believed it would only add to bitterness and widen the gulp between the Valley’s minority and majority populations.

Key separatist leaders had amid this hullaballo announced to set up a committee to hold discussions with Pandit representatives on the issue and asked them why they can’t return to their original places of residence and live side by side with their old Muslim neighbours.

However, the unrest triggered by the killing of popular militant commander Burhan Wani on July 8, seen as worst law and order situation witnessed in Kashmir in decades, paralysed the government and enfeebled political system in the scenic Valley and, in its impact, the numbness caused to the administration forced the government to put many ventures on hold. Kashmir watchers say that merely passing a resolution in the State Assembly is unlikely to pave the way for the Pandits’ return to their homes and hearth in the Valley unless the government initiates such steps which would be acceptable to the displaced families. None of the political parties which have representation in the State Assembly is known to have ever opposed the return of the Pandits to Kashmir; hence passing a resolution in the House on this issue is insignificant unless followed by practical strategies and moves to ensure resettlement of the displaced families in the Valley, they said.

Governor N.N. Vohra, had in his address to the joint sitting of the State Legislature on January 2 said the PDP-BJP government is committed to facilitate the “return and dignified rehabilitation” of Kashmiri migrants and announced that additional transit accommodation, on the lines of Vesu in Anantnag and Sheikhpora in Budgam districts, is being planned in the Kashmir Valley.

“They will be provided the required facilities till the situation normalises for them to go back to their homes,” he said. State’s finance minister, Haseeb A Drabu while presenting the budget in the Assembly later said that Rs 1,080 crore would be spent on providing State government jobs to additional 3,000 Kashmiri migrants (salary to be reimbursed by the Centre for 10 years @ Rs 30,000 per month) and Rs 920 crore on construction of 6,000 transit accommodations in the Kashmir Valley.