SP-Cong alliance in trouble after Akhilesh releases list of candidates

SP’s list includes candidates for 7 seats which the Congress holds at present, which has raised the hackles of party leaders. 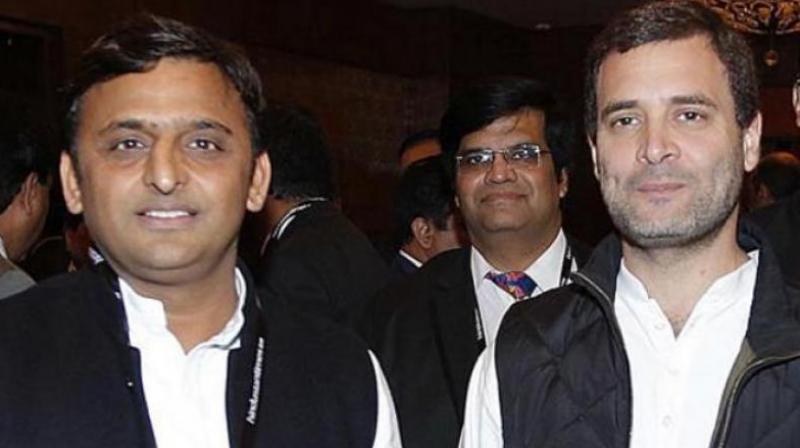 Lucknow: After Uttar Pradesh Chief Minister Akhilesh Yadav declared the names of 191 Samajwadi Party (SP) candidates for the UP elections on Friday, fissures have appeared in his alliance with the Congress.

According to reports, the SP’s list includes candidates for 7 seats which the Congress holds at present. Moreover, a senior leader from SP said that the ruling party in UP could offer at most 80 to 85 seats to the Congress to contest the polls in an alliance.

Reacting to the development, UP state Congress chief Raj Babbar said that there could be no alliance at the cost of Congress workers’ self-respect. “We are a big party and we cannot compromise on our workers' interest,” he said.

Samajwadi Party's Kiranmoy Nanda on Thursday said the Congress should ideally be given no more than 54 seats to contest. "Other than that we can give them 30-35 seats...First let the alliance happen," he said, emphasising that, "We haven't received anything from the Congress side yet."

The Congress currently holds just 29 seats in the UP Assembly and is looking to increase its tally substantially. Vice President Rahul Gandhi was on a 2-and-a-half month tour of the state, and the grand old party hopes to capitalize on the problems faced by people due to the demonetisation scheme introduced by Prime Minister Narendra Modi.

Meanwhile, Akhilesh nemesis and Mulayam Singh confidante Shivpal Yadav, along with controversial UP minister Azam Khan has made it to the first list of 191 Samajwadi Party candidates released today.

The ruling party's first list of candidates covers the first three phases of the seven-phase polling beginning on February 11.

Shivpal Yadav will contest the elections from Jaswantnagar, the constituency sought for him by SP patriarch Mulayam Singh Yadav, it was declared on Friday.

Azam Khan will contest from his traditional Rampur seat while his son Abdullah Azam has been given ticket from Swar seat (Rampur district).

The highlight of the list is inclusion of names of several Akhilesh loyalists who were left out in an earlier list of candidates that his father Mulayam Singh Yadav had released last month.

The inclusion of Shivpal in today's list of candidates indicates reconciliation between father and son.

A defiant Akhilesh had last month announced his own candidates after his father's list did not accommodate many of his key aides.

After the Election Commission's order on Monday recognising Akhilesh as SP president and granting him use of the party's 'bicycle' symbol, Mulayam had handed over to his son a list of 38 candidates that he wanted the party to field. Among them was Shivpal.
In the list of candidates declared today, 52 are Muslims and 18 women.

Though Akhilesh has taken care not to include controversial figures, still the list carries the name of Vijay Singh, who was the main accused in the murder of BSP leader Brahmdutt Dwivedi. He has been fielded from Farrukhabad.

Atiq Ahmed, a mafia-turned-politician, who had been given ticket by Shivpal from Kanpur Cantt, has been dropped and in his place Mohd Hasan Rumi has been given party ticket.

Akhilesh was upset over inclusion of Ahmed's name in the earlier list that bore the stamp of Mulayam and Shivpal. Atiq had yesterday told reporters that he would not contest the polls.

"I will not contest assembly polls. I know Akhileshji (Chief Minister Akhilesh Yadav) likes me...but then you (media) will ask him why a mafia has been given ticket," the former MP had said, adding he would work to strengthen the party and refrain from doing anything that will strengthen communal forces.

SP ticket to Atiq had invited criticism from BJP and BSP leaders, who said it was unfortunate for Uttar Pradesh that such people with criminal background were being given tickets.