Villagers collected money for an orphan girl’s wedding to end the jinx. 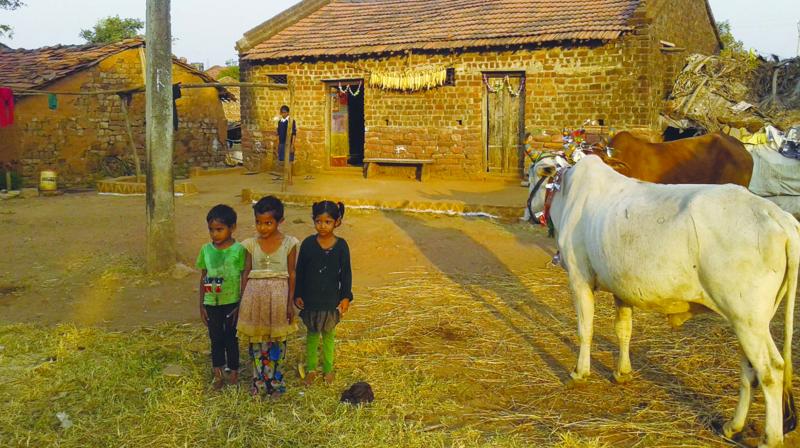 Children of Vrindavan village which is believed to be one of the many ‘cursed’ villages in Madhya Pradesh.

Guna (Madhya Pradesh): It was no ordinary occasion for residents of Chauket village in Madhya Pradesh’s Guna district when they hosted the marriage of an orphan girl last week.

For, the village, by organising the marriage ceremony, has cast off a stigma of being dubbed  as “cursed” — a reason which has forced an entire generation of girls to lead lives of spinsters as men from other villages were not willing to tie the knot with prospective brides of the jinxed village.

“The last marriage of a girl in our village took place 19 years ago. The wedding hosted by the village last week has for once and for all removed the stigma of being jinxed,” Ram Narayan Yadav, a local resident, told this newspaper.

Chauket earned the stigma when a dalit, a local inhabitant, was murdered in the village 19 years ago. Soon, a word spread across the region that the murdered man’s spirit casts an evil spell on those families who bring ‘baarat’ (bridegroom party) to marry off their boys to the girls of the village.

“Our village is now free of the curse,” Mr Yadav said, gleefully.

A nearby village of Vrindavan facing a similar fate too has followed suit. A couple of days ago, residents of the village organised the marriage of a poor girl hailing from nearby town of Aron, to get rid of the ignominy of being dubbed as a “cursed” village.

The village sponsored the wedding with contributions from each family.

“Families in other villages were unwilling to marry off their boys in our village fearing to receive a bad rap if they bring a ‘baarat’ (bridegroom party) to our village. We have been forced to conduct marriages of our girls in other villages,” Nandan Kushwaha, a local resident, said.

Preparations are presently in full swing in nearby village of Mudamata, also considered ill-fated for a similar reason, to sponsor the marriage of a poor girl hailing from Ratlam district in the village.

This is not all, elders in Ekodia, Tarpur, Jhajhon, Devri, Bhadaur,  Tiwribandhagi, Ramgiri, Rampur and Khusman villages are racing against time to locate poor families in other areas in a bid to conduct marriage of their daughters in their respective villages this wedding season.

“Due to the stigma attached to our village, our daughters are at the receiving end. Many girls from these 12 villagers have reconciled to their fate of remaining spinsters owing to the stigma,” Chandrasekhar Vyas of Tarpur, said.

“It is strange that our villages are held accursed for witnessing murders a decade or two decades ago. It is a surprise then that people don't take note of similar crimes taking place in towns like Aron,” he lamented.

“Superstition, born out of lack of literacy among villagers, drives them to attach such stigma on  villages,” sociologist Namrata Mishra said.

“The onus should be put on the murder accused to somehow find a groom for the girl of his family and convince the groom’s family to bring a baarat to his village to conduct the marriage,” S. Bairagi, the head of Jhanjhaon village, suggested. His suggestion has many takers in the village.