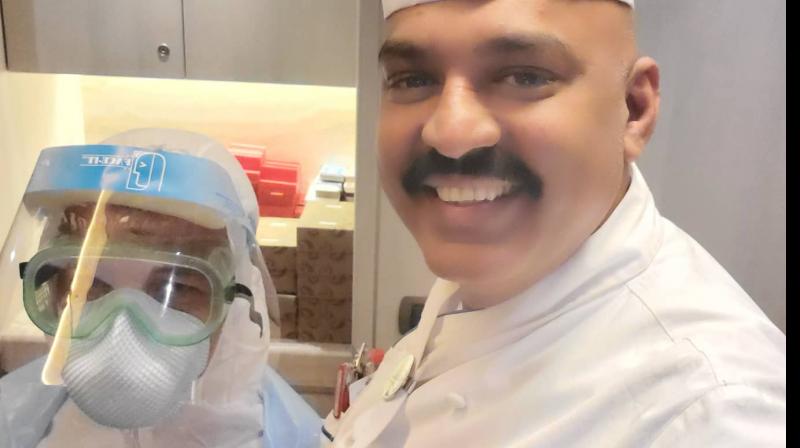 It was a nightmare and a first in the life of Kottayam native Bitta Kuruvilla, executive chef at MS Westerdam cruise ship, which was stranded at sea for several days after one of the passengers tested positive for novel coronavirus, Covid–19. It was an unforeseen circumstance for the passengers and crew. The thrill of a cruise sail had vanished in no time.

Passengers of the ship docked at Cambodian port of Sihanoukville returned home on Wednesday (February 19) after they tested negative for the virus.

“The ship, operated by Holland America Line, had 236 guests and 747 crew members. When it was learnt that a former passenger an 85 year old US woman had tested positive for the virus. The ship left from Hong Kong on February 1 and was stranded at sea for 13 days as it was denied entry to many ports. Passengers boarded from Hong Kong, where several Covid-19 cases were reported. Several countries denied permission raising concerns over virus infection. Countries like Taiwan, Thailand, Japan, Philippines and Guam denied permission for Westerdam to enter their ports.”

“Finally, the Cambodian government gave permission to dock on February 13 and few passengers deboarded and returned home. But the days of uncertainty and fear continued when a woman tested positive for the virus when she reached Kuala Lumpur. After de-boarding at Cambodian port she took a flight to Malaysia. There were apprehensions over the likelihood of new cases as many crew members and fellow passengers had interacted with the infected woman. We had no idea when we would return home,” said Bitta Kuruvila.

“Many passengers who de-boarded earlier were quarantines in hotel rooms and other facilities.We were getting mails and messages from former guests and everyone was undergoing tests. Everyone kept their fingers crossed till the test results proved negative. The Cambodian government was facing flak from other countries for giving its nod to dock. Cambodian health ministry officials were on board the ship and collected samples,” he added.

The ship had guests from US, UK, Germany, Australia and Canada.

Westerdam will leave Cambodian shore soon and the Holland America Line president Orlando Ashford came to see off the guests who had harrowing times onboard for 19 days. Considering the unfortunate turn of events which spoiled the journey, the cruise liner authorities returned the ticket fare and provided free food. They also promised a free cruise trip in another ship.

Mani Lal, native of Kollam, Sijo from Thodupuzha and Anoop from Vaikkom were the Keralites onboard Westerdam.