There were a total of 47 accused in the Dumka case, but 14 of them had died during trial. Two accused turned approvers. 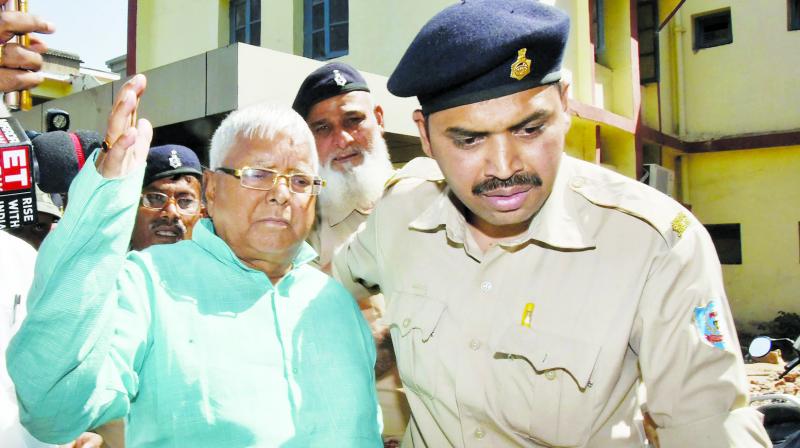 Ranchi/Patna: Jailed former Bihar chief minister and RJD president Lalu Prasad was on Monday convicted by a special CBI court of corruption and criminal conspiracy charges in the fourth fodder scam case, while another ex-chief minister, Jagannath Mishra, was acquitted.

The quantum of sentence against Lalu Yadav, 69, and other convicts in the case is likely to be pronounced on Wednesday. CBI judge Shiv Pal Singh held Lalu Yadav and 18 others guilty in the Dumka treasury case that pertains to fraudulent withdrawal of `3.31 crore from government account in 1995-96.

Mr Mishra, 80, was among the 12 acquitted in the case. A former Congress leader, Mr Mishra became chief minister of Bihar thrice and served as a minister in the Union Cabinet. He left the grand old party to join the JD(U) and then the BJP for a very short period. He is currently inactive in politics.

There were a total of 47 accused in the Dumka case, but 14 of them had died during trial. Two accused turned approvers.

Lalu Yadav’s lawyer Prabhat Kumar said that the court will begin the hearing on quantum of punishment on Wednesday and the process may end by Friday.

The Dumka treasury case is one of the six cases filed against the RJD chief as part of the over Rs 900 crore fodder scam that involved illegal withdrawal of money from government treasuries by animal husbandry department officials to provide fodder and medicines to cattle in undivided Bihar in the 1990s when Lalu Yadav was the chief minister.

The fifth case, related to the illegal withdrawal of Rs 139.39 crore from Doranda treasury, is pending in a Ranchi court. In the sixth case, involving a Rs 47-lakh fraud in the Bhagalpur treasury, a special CBI court in Patna is expected to begin trial soon.

After Monday’s court decision, Lalu Yadav’s son Tejashwi Yadav said, “We will challenge the verdict in the high court.”

Lalu Yadav’s wife Rabri Devi said, “We respect the verdict and have faith in the judiciary. But our prime concern right now is his health. He is under medication and treatment for various serious.”

Lalu Yadav is admitted at the cardiology wing of Ranchi Institute of Medical Sciences (RIMS) after he fell ill at the Birsa Munda jail on Saturday.

The fodder scam surfaced in 1996 and the first chargesheet against 38 accused was filed by the CBI on October 27, 1997. Lalu Yadav was made one of main accused in the scam.