Jammu & Kashmir terror down as Article 370 out: Amit Shah 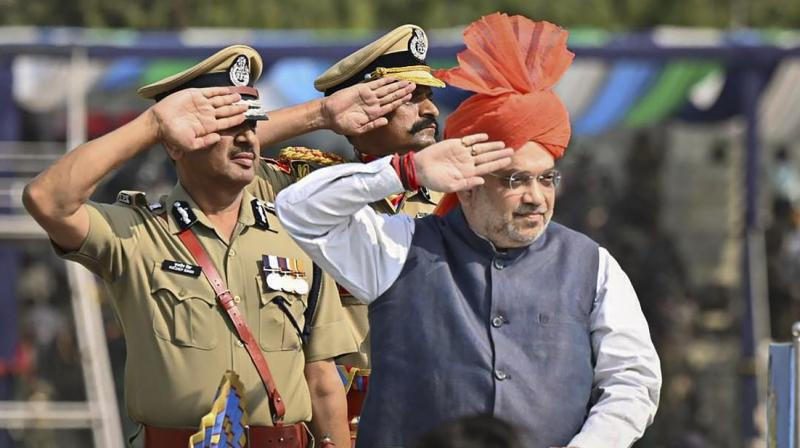 SRINAGAR: Union home minister Amit Shah said on Saturday that the “biggest achievement” of the Narendra Modi government in Jammu & Kashmir post abrogation of Article 370 is that for the first time “we have a decisive control over terrorism.” He praised the security forces for their valour and sacrifices which, he said, had made it possible.

“After the revocation of Article 370, the security forces have successfully controlled terrorism in J&K. Also, democracy has reached grassroots in J&K, there is rapid economic growth and corruption is also being tackled effectively,” he said in his address at the 83rd Raising Day Ceremony of the Central Reserve Police Force (CRPF) at Jammu’s Moulana Azad Stadium. This was the first time that the Raising Day parade of the CRPF was held outside New Delhi-NCR.

While praising the CRPF for its hard work and dedication in maintaining law and order, fighting militancy and terrorism in J&K and North-East and eliminating Naxalites, Mr Shah said that the force has maintained its tag of being country’s best police force. “We will never forget the valour and courage of this force. The great sacrifices made by CRPF men in line of duty will be written with golden words and the families of martyrs will never be left alone,” he said, adding, “As the country's Home minister, I thank the jawans of the CRPF for ensuring the people live peacefully in the country”.

Tracing the history of the “struggle” for total integration of J&K in the rest of the country, he said that it was the land of Jammu where Syama Prasad Mukherjee and the "son of the soil" Pandit Prem Nath Dogra fought a hard battle which was eventually won on August 5, 2019. “Our great leader, Syama Prasad Mukherjee gave the supreme sacrifice to ensure that the country has only 'Ek Pradhan, Ek Nishan, Ek Vidhan' (One Prime Minister, one flag and one Constitution),” he said. Before the abrogation of Articles 370 and 35A, J&K had its own constitution and flag. “Today, it’s the best tribute to the soul of Mukherjee that there is one flag, one Constitution and one leader across India,” Mr Shah said.

The Home minister said that the fact is that since Modi took over as the Prime Minister in 2014 a lot of good has taken place in J&K. “Democracy was taken to the grassroots level. Every village has now elected Panch and Sarpanch who have been empowered to work for development at the village level. After the removal of Article 370, women and weaker sections like the tribals have been ensured their rightful place. ₹ 33,000 crore investment target has been made on the ground and for this I congratulate Lt. Governor Manoj Sinha,” he said.

Mr Shah added that J&K has also broken all records in road expansion, whether these are highways, large or small roads in villages, seven new medical colleges and two AIIMS have been established and, in every other segment, record achievements are being made. “All efforts have been made to provide a corruption free government,” he asserted.

Showering praise on the CRPF, he said that whatever be the situation -- holding peaceful elections or tackling riots -- the CRPF has always been in the forefront. “CRPF rapid action force (RAF) has ensured to control riots in the shortest period. Before the RAF came into existence, it would take longer to control such situations. Also, the RAF has trained local police forces to handle riots more professionally and the two have worked together since then,” he said adding “The way CRPF is working in J&K, North-East and Naxal hit areas, I feel that in coming years peace will be restored and the force has to be withdrawn from these areas”.

The Home minister recalled that on October 21, 1959, when China attacked India at Hot Springs, some CRPF jawans fought valiantly and stopped the “aggressor”. He said that it is for this reason that police commemoration day is observed across the country on October 21. He added that it was on this day (March 19) in 1950 when Independent India’s first Home minister Vallabhbhai Jhaverbhai Patel presented colours to this force.

Mr Shah said that Prime Minister Modi has envisioned making India a $5 trillion economy and a global economic powerhouse by 2024-25 and in this the CRPF “has a great role to play by ensuring peace and tranquillity in the country”. He said that, on its part, the government is committed to take CRPF to new heights and lace it with all latest gadgets and technology.

The Home Minister who was on a two-day visit to Jammu region, reviewed the security situation and ongoing developmental works in J&K at separate meetings with officers of the uniformed forces, intelligence agencies and civil administration. He also visited the Mahanpur area in the border district of Kathua where a high security prison is coming up.