India   All India  20 Apr 2019  Hemant Karkare died due to my curse: Sadhvi Pragya
India, All India

Hemant Karkare died due to my curse: Sadhvi Pragya 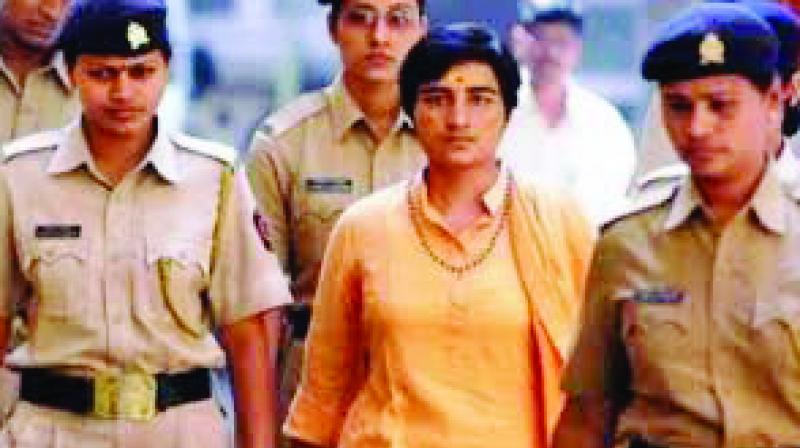 Sadhvi Pragya had also said that Karkare committed an anti-national act by falsely implicating her in the Malegaon blast case and keeping her behind bars without evidence.

Addressing BJP workers in Bhopal, Ms Thakur said Karkare died in the 26/11 Mumbai terror attacks as she had cursed him for treating her “very badly” while she was in custody in the 2008 Malegaon blast case.

“He (Karkare) tortured me and subjected me to harsh abuse which was unbearable. I told him he will be destroyed. A little over a month later ‘sutak’ (ritual observed after the death of a family member) was going to start... Just over a month later, he was shot dead by terrorists and the inauspicious period ended,” said Ms Thakur in Bhopal.

She had also said that Karkare committed an anti-national act by falsely implicating her in the Malegaon blast case and keeping her behind bars without evidence. “It was treason. It was against religion,” she added.

After an embarrassed distanced itself from her remarks and the Congress demanded an apology from Prime Minister Narendra Modi, Ms Thakur, by late Friday evening, apologised.

“Late Karkare had laid his life while fighting terrorists. He is a martyr. I apologise for making a statement against him. I am withdrawing my statement since I realised that it made enemies of country outside India happy… I had made the statement out of emotions while recounting ordeals I had faced in policy custody”, she said.

Feeling the heat over her remarks, the BJP had quickly disassociated itself from Ms Thakur’s comments, which were seen contradictory to the party’s nationalism plank.

The BJP issued a statement saying, “The BJP believes that Karkare died while bravely fighting terrorists. The BJP has always considered him a martyr” and said Ms Thakur’s comment was her “personal view.”

The Opposition, however, was quick to react and demanded an apology from the Prime Minister and claimed Ms Thakur’s remarks came from the “script” provided by the BJP. Congress president Rahul Gandhi tweeted: “Hemant Karkare gave his life protecting India. He must be treated with respect.”

Condemning her remarks, the IPS Association tweeted, “Ashok Chakra awardee late Hemant Karkare, IPS, made the supreme sacrifice fighting terrorists. Those of us in uniform condemn the insulting statement made by a candidate and demand that sacrifices of all our martyrs be respected.”

Ms Thakur’s opponent, Digvijay Singh, said the Election Commission has clearly said that no political comments should be made on Army and martyrs.

“Hemant Karkare ji was an honest and committed officer who attained martyrdom for the people of Mumbai in a terror attack,” said Mr Singh.

Congress chief spokesperson Randeep Surjewala said the remark was an insult to every soldier who has sacrificed his life for the country while fighting terrorism.

“Modiji, only BJP leaders can commit the crime of declaring 26/11 martyr Hemant Karkare a traitor. This is an insult to every Indian soldier who has sacrificed his life for Mother India while fighting terrorism. Apologise to the country and take action against Pragya,” he tweeted.

Terming Ms Thakur a “terrorist”, NCP spokesperson Nawab Malik said the BJP’s decision to give her a ticket underscored its “pretence” of fighting terrorism. He alleged that the remarks came from the “script” provided by the BJP.

Maharashtra NCP chief Jayant Patil said both the BJP and its ally Shiv Sena should be “ashamed” of her statement. Mr Patil said while the PM was seeking votes in the name of (Pulwama terror attack) martyrs, his party’s candidate “is celebrating Karkare’s death”.

“The BJP and Shiv Sena, particularly Shiv Sena chief Uddhav Thackeray should be ashamed of this,” he said.

Slamming Ms Thakur over her remarks, Punjab chief minister Captain Amarinder Singh tweeted: “Is she sane? Sadhvi Pragya has dragged patriotism to a new low by attacking decorated dead IPS officer #HemantKarkare who sacrificed himself to fight terrorism and here’s an official @BJP4India candidate insulting his memory! It’s an insult to our men in uniform and to every Indian.”