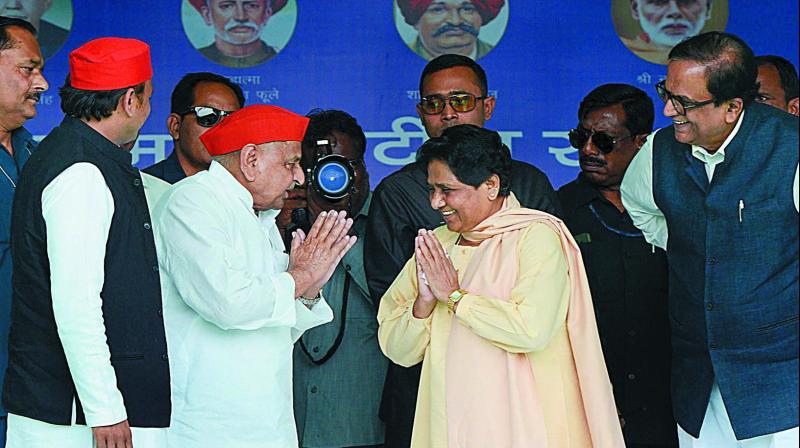 New Delhi/Mainpuri: Putting the final seal on the “Mahagathbandhan” aimed chiefly at keeping the Narendra Modi-led BJP at bay in Uttar Pradesh, old arch-rivals Mayawati, the Bahujan Samaj Party supremo, and Mulayam Singh Yadav, the Samajwadi Party’s founder-patron, on Friday shared a stage after 24 years and addressed a joint rally at the SP bastion of Mainpuri.

The BSP chief, who was described as chief guest at the rally by SP chief and former Uttar Pradesh CM Akhilesh Yadav, described the SP patron, who is fighting the Lok Sabha polls from the constituency, as “real leader” of the backwards, unlike Prime Minister Modi, whom she referred to as “naqli” and “farzi”.

In her address, Ms Mayawati referred to the infamous 1995 state guest house incident, after which she snapped all ties with SP, and said that sometimes in the interest of the party, some difficult decisions have to be taken. “I know people must be wondering why I have come here to campaign for Mulayam Singhji despite the state guest house case... Sometimes in janhit and party movement some difficult decisions have to be taken,” she said.

“There is no doubt that Mulayam Singh has taken members of all sections of society along with him under the SP banner... He is the real leader... of backwards, who still consider him their leader... He is not a “naqli” or “farzi” backward (leader) like Narendra Modi,” she said, and rounded it off by saying: “Jai Bhim, Jai Lohia, Jai Bharat!”

Mulayam Singh Yadav, in turn, welcomed her and asked his supporters to always respect her. “I and Mayawati are on the same dais after a long time. We welcome and thank her,” Mulayam Singh Yadav said in his speech, in which he also sought the help of the electorate.

The BSP, SP and the Rashtriya Lok Dal of former Union minister Ajit Singh are in alliance for the Lok Sabha polls in Uttar Pradesh. The grand alliance have fielded its candidates in 78 of the state’s 80 parliamentary seats, leaving out Amethi and Rae Bareli, from where Congress president Rahul Gandhi and UPA chairperson Sonia Gandhi are contesting respectively. The Congress is, however, fighting the polls independently in UP.

Mulayam Singh Yadav and Mayawati fell out after their ruling coalition in UP crashed in 1995, two years after they joined hands along with smaller parties to keep the BJP out of power following the demolition of the Babri Masjid in December 1992.

In what is known as the state guest house incident, the workers of the Samajwadi Party attacked a guest house where the BSP chief was camping with her supporters.

The glacial wall that existed between the two leaders since 1995 melted in the hot summer afternoon as a smiling Ms Mayawati earlier stood up to welcome a very feeble-looking 79-year Mulayam Singh Yadav, who came on stage with support from close aides.

Wearing her signature cream-coloured salwar suit, Ms Mayawati was flanked by Mulayam Singh Yadav and his son and SP president Akhilesh Yadav on either side on the dais.