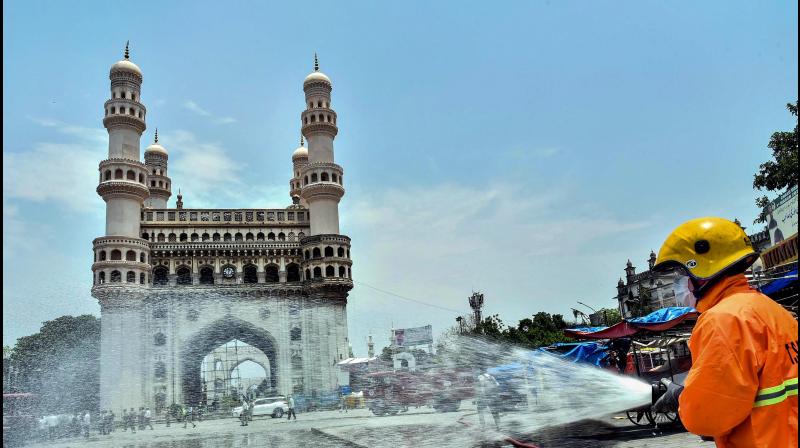 Hyderabad: The toll from Covid-19 in Telangana rose to 21 with three more deaths from the disease being reported Sunday. A total of 49 positive cases were registered during the day, taking the total to 858.

Announcing these figures at a press conference after a Cabinet meeting, Chief Minister K. Chandrashekar Rao yet again appealed to the people to stay at home and respect the lockdown to keep themselves safe. “The situation is dangerous. The disease is spreading. Do not step out,” he said. Four districts — Warangal (Rural), Yad-adri-Bhongir, Wana-parthy, and Siddipet — are currently Covid-19 free.

Hyderabad continues to lead in terms of fresh cases on Sunday with 38 reported from the GHMC limits, followed by five in Adilabad, four in Vika-rabad and two from Nalgonda.

One of the deaths reported on Sunday was that of one of the youngest victims of the disease in the state, a 50-day-old baby from Narayanpet. The baby boy was first admitted to Niloufer Hospital on April 15 after being referred there from Mahbubnagar. On April 17, the family was sent to Gandhi Hospital where the baby was diagnosed with Covid-19. “The baby passed away in the afternoon,” an official said.

The confirmation of the child suffering from Covid-19 set off a flurry of activity at Niloufer Hospital with the hospital superintendent instructing staff who attended to the child on April 15, 16, and 17 to immediately place themselves under home quarantine. Later, the hospital administration issued a clarification that the instructions were ‘routine’ but several doctors raised questions on the specificity of the first set of instructions.

So far, 186 patients have been discharged while 651 patients were under observation and treatment. “All of them are doing well,” chief minister Rao said. Almost all patients are expected to be discharged by May 4.

As on Saturday evening, 1,818 persons were in quarantine with 1,625 in the districts and 183 in the GHMC limits. He said 768 samples were being tested.
He said that even as the state battles the coronavirus, the government did not lose sight of health care needs of others. During the lockdown period, 29,991 deliveries had taken place, immunisation was apace at 94.4 per cent, 580 thalassemia patients, 5,050 dialysis patients and 1,507 cancer patients who received chemotherapy, were also serviced.