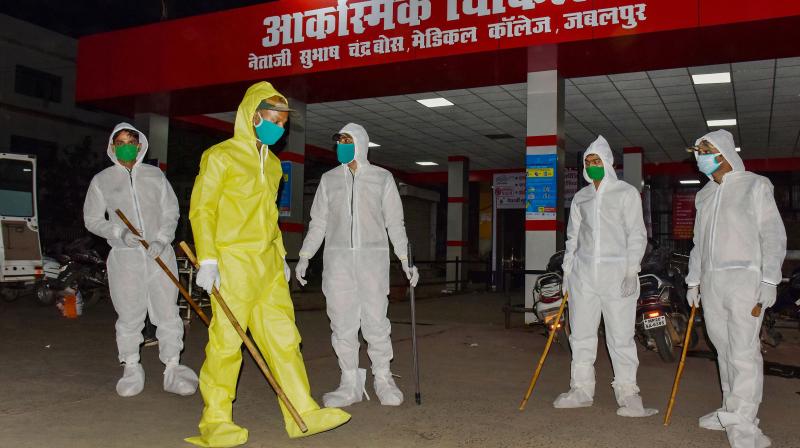 Police personnel wearing protestive suits patrol a street after a prisoner from Indore who tested positive for virus fled hospital amid nationwide lockdown in Jabalpur. The prisoner was accused of pelting stones on doctors in Indore. PTI photo

New Delhi: India tightened restrictions during the nationwide lockdown as coronavirus cases climbed on Sunday. Even though the Centre announced a lockdown till May 3, Telangana has extended it till May 7.

The death toll due to COVID-19 rose to 543 and the number of cases climbed to 17,265 in the country on Monday, according to the Union health ministry.

The number of active COVID-19 cases stood at 14, 175 while 2,546 people have been cured and discharged, and one patient has migrated, the ministry said.

The total number of cases include 77 foreign nationals.

The death toll reached 17 in Uttar Pradesh while Punjab and Karnataka reported 16 deaths each. Tamil Nadu and Andhra Pradesh have reported 15 deaths each.Rajasthan has registered 14 fatalities.

The disease has claimed five lives in Jammu and Kashmir, while Kerala and Haryana have recorded three COVID-19 deaths each.

Jharkhand and Bihar have reported two deaths each, while Meghalaya, Himachal Pradesh, Odisha and Assam have reported one fatality each, according to the ministry's data.

However, a PTI tally of the figures reported by various states as on Sunday showed 565 COVID-19 deaths in the country.

Bihar has reported 93 coronavirus cases, while Odisha has 68 such cases.

Forty-four people have been infected with the virus in Uttarakhand, while Jharkhand has 42 cases and Himachal Pradesh has 39 cases.Chhattisgarh has 36 cases so far.

Assam has registered 35 cases, Chandigarh has 26, Ladakh 18, while 16 cases have been reported from the Andaman and Nicobar Islands.

Meghalaya has reported 11 cases, while Goa and Puducherry have seven COVID-19 patients each.