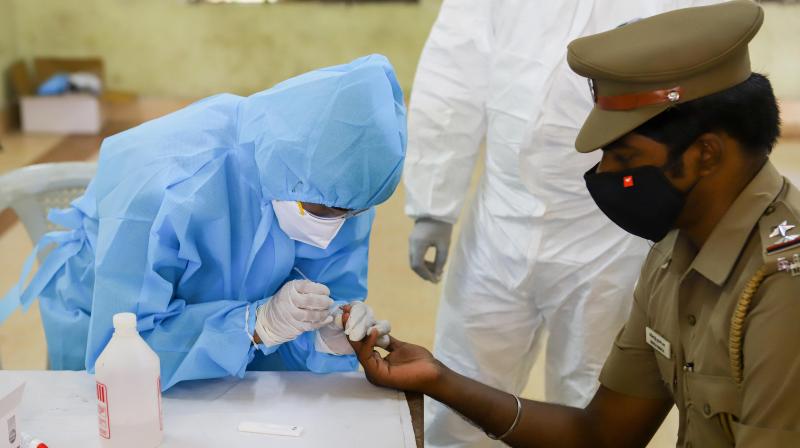 A police officer gives a sample for a coronavirus rapid test in Chennai on Sunday, April 19, 2020. (PTI)

Chennai: After a deceptive slide in the past seven days, Tamil Nadu witnessed a sharp spurt in new Covid-19 cases on Sunday with 105 new positive cases being reported.

The matter was serious enough for prime minister Narendra Modi to make a call to Tamil Nadu chief minister Edappadi Palaniswami, who underlined to him the urgent need for test kits.

Tamil Nadu now has 1,477 coronavirus cases with 16 deaths. A 60-year-old neurosurgeon was the lone victim to Covid-19 on Sunday. He had taken ill three days ago and hospital sources said the patient had other medical complications.

Significantly, Sunday's surge largely came from the Greater Chennai area with as many as 50 persons testing positive for the virus (ten primary contacts and 40 secondary), followed by Thanjavur district accounting for ten new cases today.

Among the 50 positives recorded in Chennai were two journalists, a reporter of a Tamil newspaper and a sub-editor of a Tamil news channel. The former was admitted to the Omandurar hospital and the latter to Stanley Medical College Hospital in Chennai.

Subsequent to this news, Sunday evening's media briefing was cancelled as the reporter had been attending it in recent days.

Other significant cases testing positive included a sub-inspector of police doing duty at Esplanade, leading to that police station being shut down. Others included four post-grad medical students, three from the Rajiv Gandhi Government General Hospital and another of Stanley Medical College Hospital.

In Thanjavur, ten more cases were confirmed positive on Sunday. Officials said, of them six infected persons belong to Adhirampattinam and others from Vallam, Kumbakonam, Neyvasal and Papanasam. With these the total number of corona infected cases shot up to 46 in that district.

In Tiruchy, two women staff of a pharmacy run by a person who was among the Tablighi Jamaat New Delhi meeting returnees tested positive for the virus on Sunday.

An official communique released after Narendra Modi's phone conversation with Palaniswami said the prime minister promised to send test kits to Tamil Nadu. Authorities said testing people rapid test kits to ascertain antibodies for the virus has been expanded across the state.