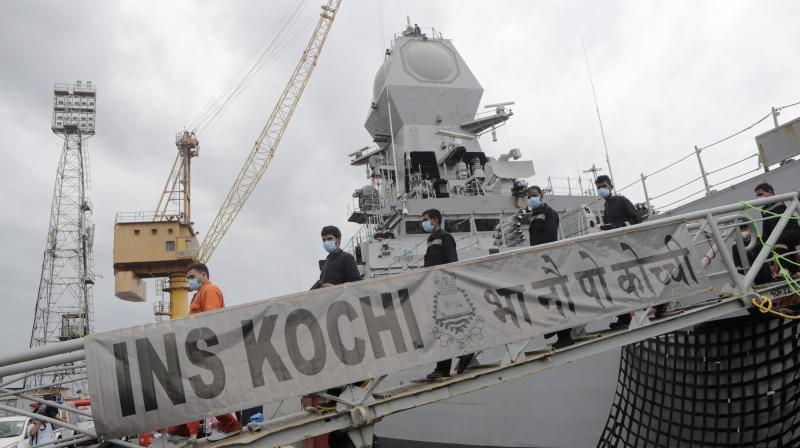 People rescued by the Indian navy from a barge that sank in the Arabian sea walk out from Indian naval ship INS Kochi in Mumbai, India, Wednesday, May 19, 2021. The barge carrying personnel deployed for offshore drilling sank off Mumbai as a deadly cyclone blew ashore this week. (AP /Rajanish Kakade)

Mumbai: With 49 people on board a barge that sank in the Arabian Sea four days ago still missing, Indian Navy ships worked through the night, using searchlights to trace any movement in the pitch dark waters, as hopes of finding more survivors began to recede on Thursday.

The Navy on Thursday morning launched a fresh aerial search and rescue mission, deploying helicopters to scour the waters off Mumbai coast, where the accommodation barge P305 went adrift in Cyclone Tauktae fury before it sank Monday.

Mumbai police have announced they will conduct a probe as to why the ill-fated barge remained in the turbulent area despite warnings about cyclone Tauktae, an official said. They registered an accidental death report (ADR) on Wednesday in connection with the death of the personnel on the barge.

"The Navy's Search and Rescue (SAR) operations entered the fourth day today. Naval ships and aircraft are presently undertaking SAR of the missing crew members of Accommodation Barge P-305, which sank on Monday 35 miles off Mumbai," a Navy spokesperson said.

Another Navy ship INS Talwar was the 'On Scene Coordinator' off Gujarat coast and assisted Support Station 3 (SS-3) and Drill Ship Sagar Bhushan, which were being safely towed back to Mumbai by ONGC support vessels, he said.

Navy ships were deployed on Monday after the Navy was informed that barge 'P305' had gone adrift off the Heera oil fields in Bombay high area with 261 personnel on board. The oil fields are around 70 km southwest of Mumbai.