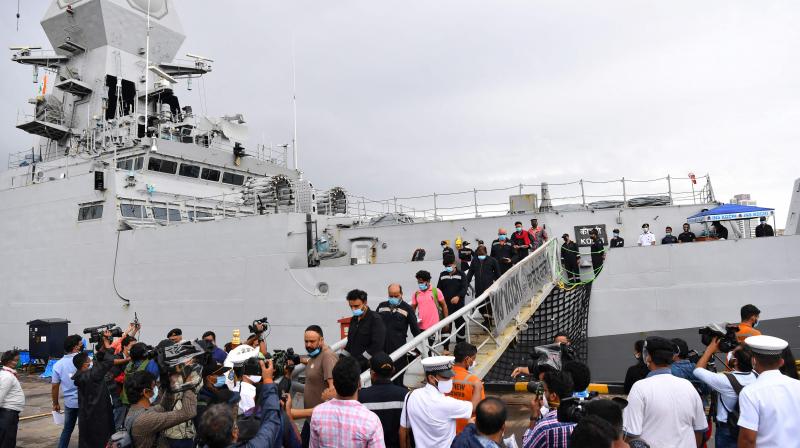 Mumbai: The Indian Navy on Thursday confirmed the death of 37 personnel onboard barge P305 with the recovery of their bodies. Barge P305 went adrift and sank in the Arabian Sea off Mumbai coast during Cyclone Tauktae and search operation for at least 36 missing personnel is still on. A total of 188 of the 261 onboard have already been rescued by Indian Navy and Coast Guard.

The barge sank 35 nautical miles off Mumbai as Cyclone Tauktae battered India's west coast. P305 was amongst the four barges that suffered during the cyclone. The other three were Gal Constructor and Support Station-3 -- deployed by the engineering firm Afcons for its ONGC (Oil and Natural Gas Corporation) contract.

"In one of the most challenging SAR Ops in the aftermath of #CycloneTauktae, 325 survivors have been rescued & 37 #BNV recovered off Mumbai & Gujarat Coasts. Vigorous SAR efforts continue for the missing crew of Barge P305 which sank off Mumbai with five IN ships, aircraft and helos deployed," the Indian Navy spokesperson tweeted on Thursday.

The Navy is leading a massive, round-the-clock rescue effort that includes several of its ships, P-81 reconnaissance aircraft and Sea King helicopters, as well as Coast Guard and ONGC vessels, to detect survivors from the sunken barge and other vessels stranded or affected by the storm.

Indian Navy Commodore Ajay Jha said that the Navy on Thursday morning launched a fresh aerial search and rescue mission, deploying helicopters and Indian Navy ships through the night, to trace any movement in the dark waters to look for survivors. According to him the search operations would continue for another three days at least.

The Directorate General of Shipping had already ordered an investigation into the deaths. Now the Mumbai Police has also announced a probe into barge P305 remaining in the area despite storm warnings. An ADR (accidental death report) was registered Wednesday in connection with the deaths.

On Thursday morning the Coast Guard said another missing tug -- Sangeeta, with a crew of 10 -- had been located about 10 nautical miles west of Maharashtra's Tarapur. The Coast Guard found the ship and has provided food, water and medical support to the crew while it is being towed back.

Another Navy ship, INS Talwar, was the "On Scene Coordinator" off Gujarat coast and assisted Support Station 3 (SS-3) and Drill Ship Sagar Bhushan, which were being safely towed back to Mumbai by ONGC support vessels, an official said.

The ministry of petroleum and natural gas announced a high-level inquiry into “lapses and gaps” in the system. It will probe the sequence of events leading to the ONGC support vessels left stranded by the cyclone, see whether warnings by the India Meteorological Department and other statutory authorities were acted upon or not, and if the SOP for securing vessels and disaster management was followed.

According to barge’s chief engineer Rahman Shaikh, everyone onboard could have been saved had many of the life rafts not had punctures and the captain had taken the cyclone warnings seriously.

Shaikh has been admitted to Apollo Hospital in Tardeo with injuries on his knee. He stated that they had received the cyclone warning a week before it hit.
Many other vessels in the vicinity left and he had told the captain, Balwinder Singh, that they must also leave for the harbour. However, the captain said that winds were not expected to be over 40 kmph and the cyclone would cross Mumbai in one or two hours.

The Maharashtra Congress demanded the resignation of Union petroleum minister Dharmendra Pradhan on moral grounds over the death of 37 personnel on board the barge that sank in the Arabian Sea, and termed it as a "man made tragedy".