45-yr-old victim, Qasim, is seen lying on the ground with the crowd refusing to give him water. 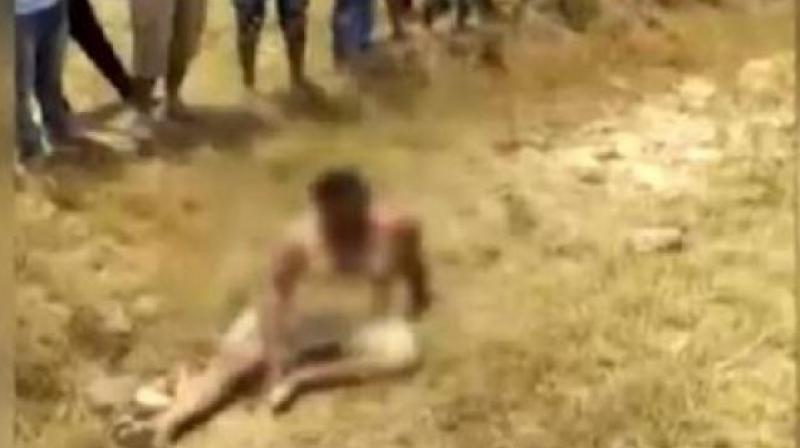 45-year-old UP man was lynched by mob in Hapur's Pilakhuwa village on Monday. (Photo: Screengrab)

Hapur: A man was lynched by a frenzied mob in Uttar Pradesh's Hapur, around 70 km from Delhi, allegedly over rumours of cow slaughter. The man’s friend was seriously injured.

The incident took place at a sugarcane field in Hapur’s Pilakhuwa village on Monday. The victim has been identified as 45-year-old Qasim. The injured Samayuddin, 65, is being treated at a local hospital.

The incident took place when Uttar Pradesh Chief Minister Yogi Adityanath was holding a meeting with BJP MPs and MLAs in Ghaziabad and the police were on high alert.

The two men were brutally thrashed after a scuffle with some bike-borne men from the neighbouring village, the police said. But according to report in The Indian Express, the families of the victims and the two alleged attackers, who have been arrested, insisted the assault was related to cattle smuggling.

Their claims appear to be substantiated by a chilling video of the aftermath of the violence, which has gone viral. The minute-long video shows Qasim lying in a field, with his clothes torn. While the victim screams in pain, a voice is heard warning the attackers to back off and give him some water.

"You have hit him, assaulted him, enough is enough... please understand there are consequences," the man is heard saying. Another voice cuts him off and says, "Had we not reached within two minutes, the cow would have been slaughtered." A third man is heard saying, "He is a butcher... someone ask him why he was trying to slaughter a calf?"

Qasim is seen lying on the ground; the crowd refuses to give him water.

2 persons were attacked by Cow Terrorists in Hapur, UP . Someone "claimed" that they were carrying cattle (Not slaughtering) and Cow Terrorists attacked them . One man Qasim (45yo), succumbed .

An FIR has been filed by Samayuddin's family does not mention cow slaughter, police said. "Two people were passing through the Bajheda village on a motor-cycle. They fought with some locals over right of way. After that they were assaulted and one person died. The FIR filed by the family says the motorcycle of the two men collided with another one and that led to an argument," reports quoted senior police officer Pawan Kumar saying.

The Uttar Pradesh Police has arrested two people - Yudhishtir Singh and Rakesh Sisodia – and has registered murder case against them. "There are rumours of cow slaughter... we are investigating that angle too," said Sankalp Sharma, Hapur's senior-most police officer.

The incident came days after a similar attack took place in Jharkhand’s Godda district where two Muslim men were beaten to death on suspicion of cattle theft last Wednesday.