India   All India  20 Jun 2019  Cow rescued from septic tank after 10 days in Hyderabad
India, All India

Cow rescued from septic tank after 10 days in Hyderabad

The higher officials have appreciated the Disaster Rescue Team for its work. 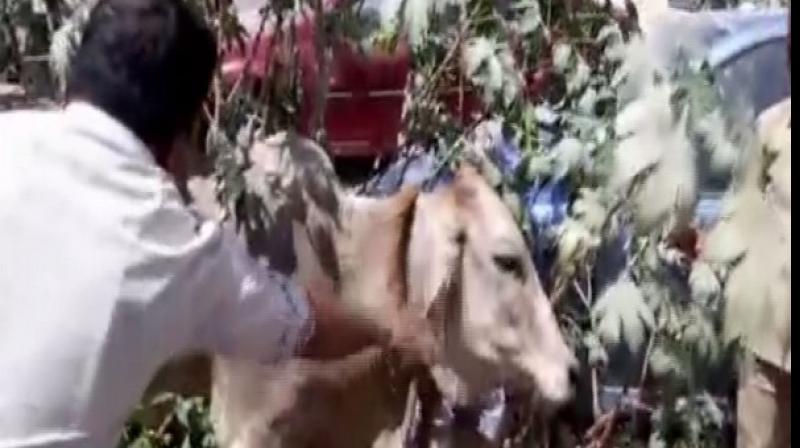 Following the complaint, the team immediately swung into action and put all the efforts to rescue the cow. (Photo: ANI)

Hyderabad: The GHMC Disaster Rescue team on Wednesday safely pulled out a cow which had fallen in a septic tank 10 days ago in the Allwyn Colony under Chandnagar circle.

The incident occurred owing to absence of lid on the septic tank and compound wall.

The cow remained in the septic tank for 10 days as no one filed a complaint in the connection. However, the incident came to light after the locals informed the disaster rescue team about the incident. Following the complaint, the team immediately swung into action and put all the efforts to rescue the cow.

"Unfortunately, a cow fell in the septic tank. The locals today noticed that the cow is in a helpless condition in the septic tank. She had lived there without food and water. It was a difficult task to rescue her as the tank was around 10-feet deep. With all our efforts, we rescued the cow," GHMC officials told ANI.

The cattle became very lean and weak as it was deprived of food and water for 10 days. She was provided with some fodder and water and later shifted it to a nearby veterinary hospital for treatment.

The higher officials have appreciated the Disaster Rescue Team for its work.