The material for Sarvatra Kavach is the most advanced in the world, sources said. 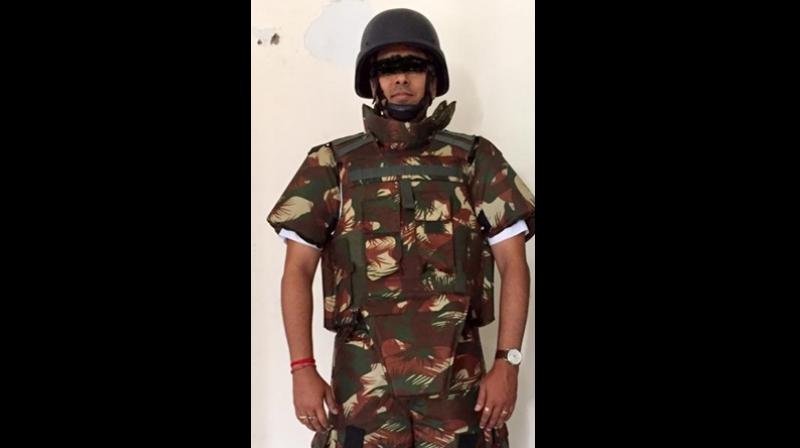 This is how the body armour could look on an Indian soldier.

New Delhi: The Indian Army is on the verge of inducting 'Sarvatra Kavach', a full body armour suit, for its soldiers which will not carry any Chinese raw material and is designed, developed and manufactured in India, said sources on Friday.

The complete research and development of this armour suit was undertaken by the Indian Army itself. Major Anoop Mishra, a serving Army officer, who has faced bullets during military operations, is the man behind 'Sarvatra Kavach’. It provides protection to the neck, torso, upper arms, groin and thighs from all kinds of small arms ammunition.

“Indian Army is at an advanced stage of procurement of Sarvatra Kavach for field trials,” said sources.

“The 'Sarvatra Kavach' is production-ready and will be completely 'Made in India'. It has minimal requirement of imported raw material, none of it coming from China,” said sources in the Indian Army. They said that once indigenous manufacturing commences, the entire range of raw material will also be procured from India.

“There are only handful countries in the world that have indigenously developed full body armour suit,” said a senior official.

The official said that room intervention and ensuing close quarter gunfights are the most dangerous anti-terrorist operations. Major Mishra's innovation has been recognised with an award of Vishisht Seva Medal by Army and a Letter of Appreciation from the Prime Minister.

A controversy had erupted last year after Indian companies contracted for 1.8 lakh bulletproof jackets for the Army came under the scanner for importing up to 40 per cent Chinese raw material.  These companies had initially said that the jackets contained raw material from western Europe and the US.