India   All India  20 Jul 2017  So many Kovinds in the country today, says President-designate
India, All India

So many Kovinds in the country today, says President-designate

The former Bihar governor and 2-term RS member thanked the people of India and elected representatives for showing their confidence in him. 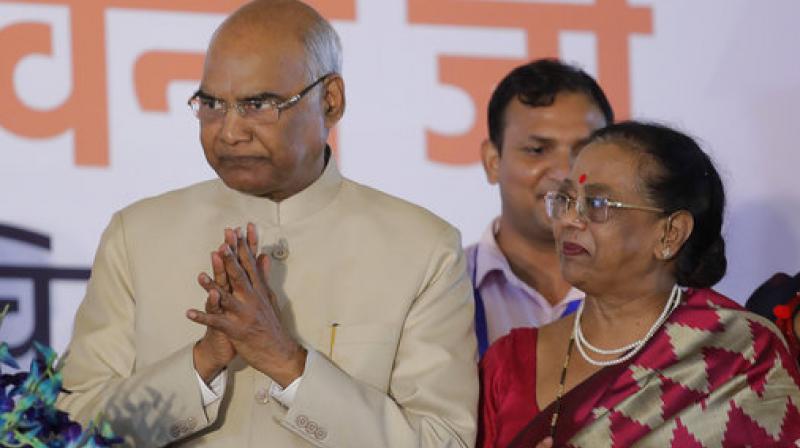 New Delhi: The rains in Delhi on Thursday reminded him of his 'kachcha' home in his paternal village, President-elect Ram Nath Kovind said today and sent out the emotive message that he represented all those getting drenched or sweating it out so they could get a meal.

In his first comments after his election, Kovind, 71, who will be only the second Dalit to occupy the highest constitutional position, asserted that protecting the Constitution and maintaining its dignity would be his duty.

He said he never thought or aspired to be the president but his "tireless service" to his society and country had brought him to this position.

This sense of tireless service was an "Indian tradition" and his election as the president was a symbol of the greatness of Indian democracy, Kovind told reporters at his Akbar Road residence.

"It is a very emotional moment for me personally. It is raining a lot in Delhi today and it reminds me of days when I would stay in my paternal village. It was a 'kachcha' home of mud walls. The straw roof would not be able to stop water during rains. We all brothers and sisters would huddle around a wall, waiting for the rains to stop," he said.

"There would be so many Ram Nath Kovinds in the country today, getting drenched in rains, doing farm work, labour and sweating it out so that they can get their evening meals. I want to tell them that this Ram Nath Kovind of Paraunkh village is going to Rashtrapati Bhavan as their representative," the president-elect continued.

His election to a position held by distinguished personalities like Rajendra Prasad, Sarvepalli Radhakrishnan, APJ Abdul Kalam and Pranab Mukherjee had given him a sense of huge responsibility, he said.

An emotional but poised Kovind said his election was a message to all those who were discharging their duties with honesty and integrity.

Citing a Sanskrit proverb, he said he would assure every citizen of the country that he would work relentlessly to serve the country and make everyone happy.

The former Bihar governor and two-term Rajya Sabha member thanked the people of India and elected representatives for showing their confidence in him.

He also sent his good wishes to Meira Kumar, his rival in the election and the opposition's candidate.