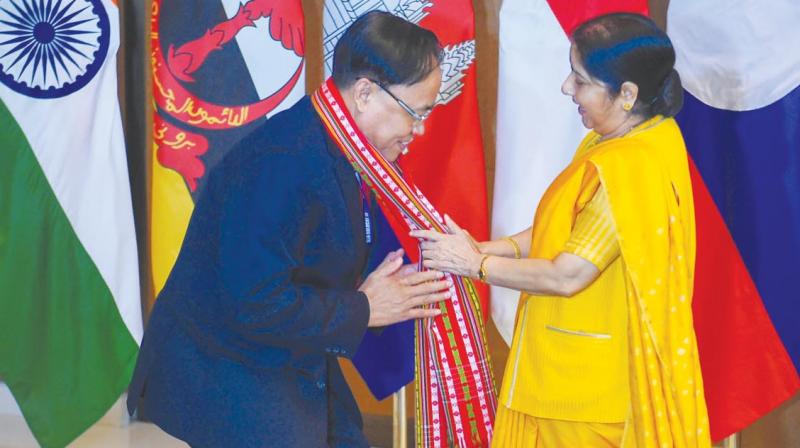 New Delhi: The Indo-Pacific region must be a “free, open and an inclusive” one with a “common, rules-based order”, external affairs minister (EAM) Sushma Swaraj said on Thursday, adding — in what is being seen as a veiled reference to China that — “there is an imperative need to eschew protectionism, nationalism and avoid a return to great power rivalries”.

In her address at the Delhi Dialogue conference in the Capital which is focusing on Indo-Asean ties, the minister said, India’s interests in the Indo-Pacific are vast and our engagement is deep. Our vision, in one word, is SAGAR which stands for — Security and Growth for All in the Region. We have a comprehensive agenda of regional cooperation with both IORA and Asean.” The conference was attended among others by top diplomats from Asean countries based in New Delhi.

The EAM said, “Our expanding partnerships with all countries in the region is an integral part of this. The Indo-Pacific must be a free, open and an inclusive region. We must follow a common, rules-based order, that takes into account the equality of all, irrespective of size and strength. It should allow use of common spaces on sea and in the air.”

Elaborating on India’s views on the region, she said, “Our vision of the Indo-Pacific, not only involves physical inter connectivity, but also entails building bridges of trust, based on mutual respect, giving due regard for sovereignty and territorial integrity, consultation, transparency, viability and sustainability. Finally, there is an imperative need to eschew protectionism, nationalism and avoid a return to great power rivalries.”