The governor is widely expected to send a report on the developments to the home ministry, which will assess the options before it. 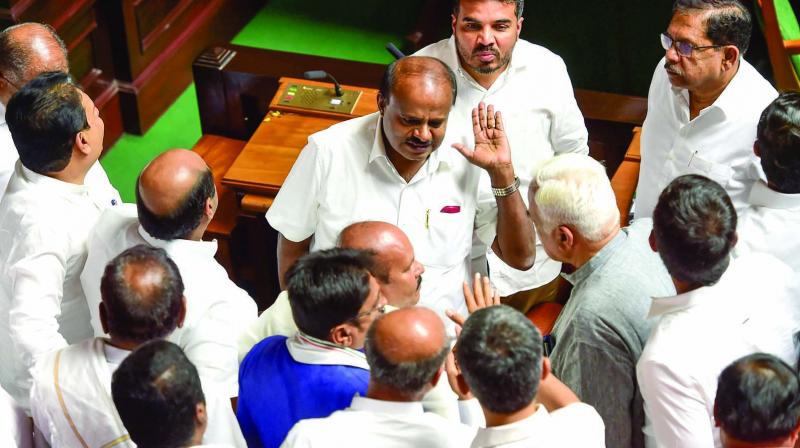 Karnataka CM H.D. Kumaraswamy with his cabinet colleagues after the Assembly was adjourned in Bengaluru on Friday. (Photo: PTI)

Bengaluru/New Delhi: The week-long political drama in the Karnataka Assembly snowballed into a constitutional crisis on Friday as the JD(S)-Congress coalition government facing the threat of collapse, not only flagrantly ignored the 1.30 pm deadline set by governor Vajubhai Vala for proving its majority, but did the same again when it was slapped with a second deadline of 6.30 pm by the governor.

The Speaker, in a further red flag to the BJP, then adjourned the proceedings at around 8.30 pm and called for the session to resume only on Monday morning.

A fresh legal battle loomed, as the crisis set off by the shock resignation of 15 MLAs of the ruling coalition a fortnight ago deepened, with chief minister H.D. Kumaraswamy and Karnataka’s Congress unit moving the Supreme Court, contending that governor Vajubhai Vala cannot dictate to the Assembly the manner in which the debate on the confidence motion has to be taken up.

The governor is widely expected to send a report on the developments to the home ministry, which will assess the options before it. However, legal experts have said that the state government cannot be dismissed unless a trust vote is held in view of the judgment in the S.R. Bommai case, when it was ruled that a government’s majority can only be proved on the floor of the House.

The chief minister questioned the deadlines set by the governor one after another to complete the trust vote, and also sought clarification on the apex court’s July 17 order which said that the 15 rebel MLAs cannot be compelled to attend the proceedings of the House. He also said its July 17 order was coming in the way of the party issuing a whip to its legislators in the ongoing trust vote proceedings.

It said Karnataka Assembly Speaker K.R. Ramesh Kumar has also opined that the trust vote will take place only at the end of the debate. “In these circumstances the governor cannot dictate to the House the manner in which the debate of the confidence motion has to be taken up,” the plea said.

Mr Kumaraswamy said he had written to the governor on Friday informing him that the House was already considering the confidence motion and the debates are currently going on.

He said the governor has sent another communication that the trust vote should be held before 6 pm on Friday. “I have received a second love letter,” said Mr Kumaraswamy in the Assembly on the governor’s second missive to him in two days.

“The directions of the governor are completely contrary to the well settled law laid down by this court in relation to the governor’s powers. The directions of the governor are ex-facie in contravention of the judgment of this court,” the plea said. It contended that any interpretation of the July 17 order which “whittles down” the power of a political party to issue a whip to its legislators would be in the teeth of the provisions of the Tenth Schedule of the Constitution and the judgment of the constitution bench of the court.

Mr Kumaraswamy said a political party under the Tenth Schedule has a constitutional right to issue a whip to its legislators.

“The exercise of this right under the Constitution is not circumscribed by any condition nor can it be subject to any restrictive time even prior to the issuance of the whip. More importantly, any enquiry for the purposes of the Tenth Schedule is a proceeding of the Legislature of the State within the meaning of Article 212 of the Constitution,” the plea said.