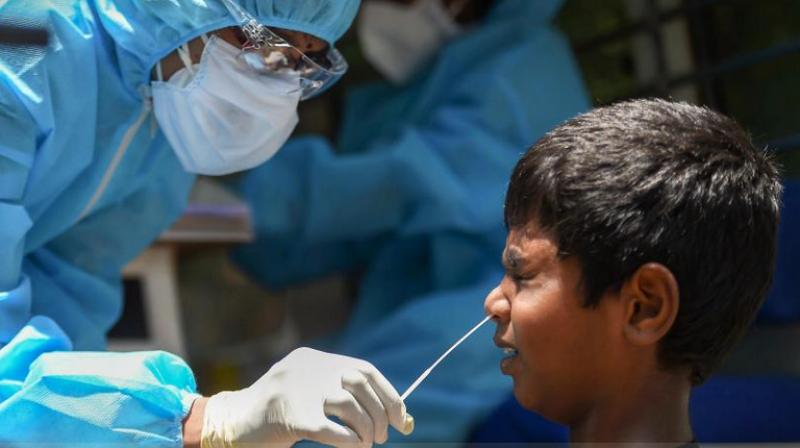 The visit of the central team comes amid allegations of negligence and mishandling of COVID-19 situation by the state government. (PTI Photo)

Patna: Amid rising corona cases a three-member central team reached Patna on Sunday to review the Bihar government’s preparedness to deal with the crisis in the state.

The visit of the central team comes amid allegations of negligence and mishandling of COVID-19 situation by the state government being led by Chief Minister Nitish Kumar.

The team is also likely to visit other districts including Gaya to review the sudden rise in coronavirus cases.

As per an assessment, the total number of COVID cases in the state has gone up to 24967. Patna with 3581 positive cases and 28 deaths has been the worst hit followed by Bhagalpur where 1532 cases have been reported and 16 persons have died due to the deadly virus.

Other districts where the situation is grim are Siwan where 1094 cases and 6 deaths have been recorded, Muzaffarpur 1082 cases and 8 deaths and Gaya 768 cases and thirteen deaths.

RJD leader Tejashwi Yadav had earlier blamed Chief Minister Nitish Kumar for “not being able to handle the crisis properly” and alleged that the government was hiding actual figures and misleading people of Bihar.

He also lashed out at the state government for conducting “low number of tests”.

“Testing in Bihar is the lowest in the country. The government is also trying to hide actual COVID figures. The central team is being sent because cases are rising in Bihar. The state government should be more transparent in providing actual figures” Leader of the opposition in the state assembly Tejashwi Yadav said.

Besides, people are also sharing videos and pictures on social media to show the apathy of doctors and medical staff towards Covid-19 patients in Bihar.

Sources said that cases of negligence in government hospitals could be due to the lack of PPE kits and other safety gears. A senior doctor in Patna told this newspaper that, “medical staff can’t do anything because they don’t have enough PPE kits and fear being infected with the virus”.

The ruling BJP however, feels that the opposition RJD has been raising the issue for political gains ahead of assembly elections which is due later this year.

“The opposition parties in Bihar have done nothing during COVID-19 period which is visible in their desperate attempt to tarnish the image of Nitish Kumar led NDA government. The opposition has resorted to propaganda by below the belt attack and presenting negative connotations. It is clear the collective effort of Union as well as the state government is ensuring the entire good and positive thing on ground zero. The Bihar government has taken up the challenge well”, BJP spokesperson Nikhil Anand said.