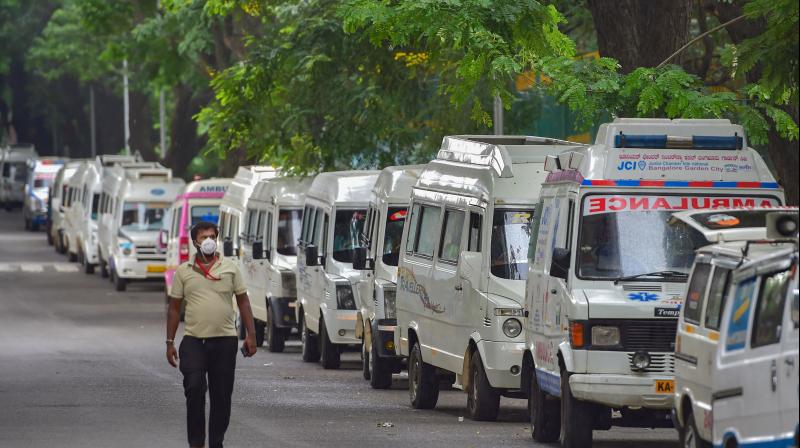 Ambulances lined up on JC Road in Bengaluru amid total lockdown. PTI photo

Already with the third largest number of Covid-19 cases worldwide, India on Sunday saw a record single-day jump of 40,425 cases pushing its tally to 11,18,043.  This is the first time the country has seen a one-day jump of over 40,000 cases and the fourth consecutive day the Covid count has increased by over 30,000. With 681 new fatalities reported in the last 24 hours, the death toll has also shot up to 27,497. The health ministry said over 70 per cent of the deaths were due to co-morbidities.

In a significant development, New Delhi’s AIIMS has decided to enrol healthy individuals from Monday for conducting human clinical trials of the country’s first indigenous coronavirus vaccine, Covaxin. AIIMS Delhi is among 12 institutes selected by ICMR to conduct Phase 1 and Phase 2 human trials of Covaxin. The vaccine will be tested on 375 volunteers in Phase 1 and 100 of them will be from AIIMS. Covaxin was developed by Hyderabad-based Bharat Biotech in collaboration with ICMR and the National Institute of Virology.

The Indian Council of Medical Research is also going to conduct a study to evaluate the effectiveness of the BCG vaccination in elderly individuals between the ages of 60 and 95 living in Covid hotspots across six cities. The objective is to see if the BCG shots can prevent the occurrence of the coronavirus infection and reduce the disease’s severity and mortality rate among the elderly.

Bihar, Punjab and Rajasthan have reported seven fatalities each, followed by Telangana with six deaths, Jammu and Kashmir five, Odisha and Puducherry three deaths each, Assam, Tripura and Kerala two each, while Chandigarh, Chhattisgarh and Uttarakhand have registered one fatality each.

Puducherry has registered 28 deaths, Chhattisgarh 24, Goa 21, Chandigarh 12, Himachal Pradesh 11, Tripura 5, Arunachal Pradesh 3, Meghalaya and Dadra and Nagar Haveli and Daman and Diu two each, while Ladakh has reported one fatality.