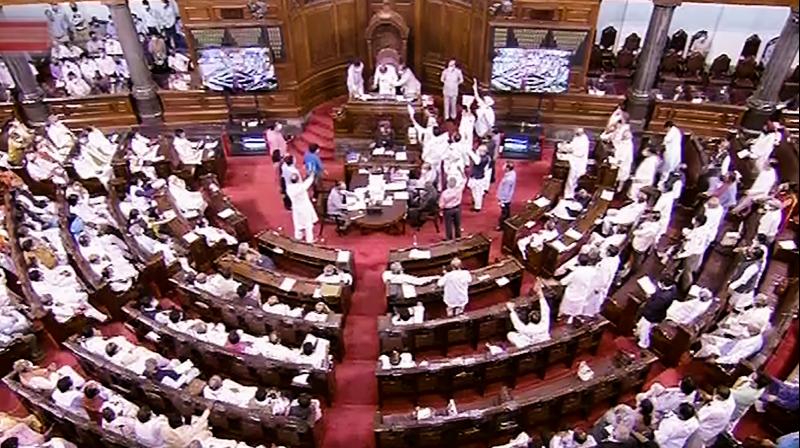 Parliamentarians in the Rajya Sabha, on the first day of the Monsoon Session of Parliament, in New Delhi, Monday, July 19, 2021. (RSTV/PTI Photo)

New Delhi: The Monsoon Session of Parliament made a turbulent start on Monday as the Opposition parties questioned the government over the alleged snooping of politicians, journalists, activists, businesspeople and others, including a top virologist, using private Israeli spyware. Both Houses of Parliament were adjourned for the day even though the government dismissed the charges of surveillance.

Union minister of electronics and information technology Ashwini Vaishnaw, in a suo motu statement in the Lok Sabha, said that with several checks and balances being in place, “any sort of illegal surveillance” by unauthorised persons is not possible in India while Union home minister Amit Shah questioned the timing of the media reports, saying that they were meant to derail the Monsoon Session.

“A highly sensational story was published by a Web portal last night. Many over-the-top allegations were made around this story. The press reports appeared a day before the Monsoon Session of Parliament. This can’t be a coincidence… There is no substance whatsoever behind this sensationalism,” said Mr Vaishnaw.

Incidentally, his name too figures in the list of people possibly snooped on using the Israeli spyware. “The publisher of the report states that it cannot say if the numbers in the published list were under surveillance. The company whose technology was allegedly used has denied these claims outright. And the time-tested processes in our country are well-established to ensure unauthorised surveillance doesn’t occur,” the minister said, defending the government.

However, the Opposition parties did not accept the response and have demanded an independent investigation into the allegations of snooping. “I am conscious that the IT minister has declared in Parliament that no unauthorised surveillance has taken place. It raises questions -- was there authorised surveillance and if so, on what basis was it authorized: If Govt didn’t authorise it and didn’t do it, then who did it? Pegasus manufacturer NSO Group says they only sell it to governments, and it costs about $7 million for the software. Obviously, only governments will be able to spend that kind of money… The Government of India has denied resorting to unauthorised surveillance. The question this raises is: if Pegasus is only sold to governments, which other government (China/Pakistan?) are using it to snoop on prominent Indian citizens? Shouldn’t the authorities call for an independent investigation?” said Shashi Tharoor, Thiruvanthapuram’s Congress MP and chairman of the parliamentary standing committee on IT.

Defending the government, the IT minister tried to punch holes in the media stories, saying the reports themselves claimed that the presence of a phone number in the data does not reveal whether a device was infected with Pegasus or subject to an attempted hack. “Therefore, the report itself clarifies that presence of a number does not amount to snooping,” he added. NSO has also said the list of countries shown using Pegasus was incorrect, and many countries mentioned aren’t even our clients. It also said most of its clients are Western countries. It is evident that NSO has also clearly rubbished the claims in the report,” Mr Vaishnaw said.

The government in a statement said late Sunday night the allegations on government surveillance on specific people had no concrete basis. “In the past similar claims were made regarding the use of Pegasus on WhatsApp by the Indian State. Those reports also had no factual basis and were denied by all parties, including WhatsApp, in the Supreme Court. This news report too, thus, also appears to be a similar fishing expedition based on conjectures and exaggerations to malign Indian democracy and its institutions,” the government statement said.

Commenting on the disruption in the Lok Sabha and Rajya Sabha on Monday on the snooping issue, Mr Amit Shah said: “Disruptors and obstructers will not be able to derail India’s development trajectory through their conspiracies. The Monsoon Session will bear new fruits of progress… People have often associated this phrase with me in a lighter vein, but today I want to seriously say -- the timing of the selective leaks, the disruptions… Aap Chronology Samajhiye! This is a report by the disruptors for the obstructers. Disruptors are global organisations which do not like India to progress. Obstructers are political players in India who do not want India to progress. The people of India are very good at understanding this chronology and connection,” he said in a statement.

“Any form of illegal surveillance is not possible with checks and balances in our laws and robust institutions… Those who broke the story themselves said the presence of a particular number in the database does not confirm that it is infected with Pegasus,” said former IT minister Ravi Shankar Prasad.

A probe by a consortium of news outfits led by Paris-based Forbidden Stories reportedly found that private Israeli firm NSO Group licenced its military-grade spyware Pegasus to several foreign government groups for possible surveillance of their own citizens. “Opposition leader Rahul Gandhi was selected as a potential target for snooping in the run-up to the 2019 poll, however, in the absence of forensics, it is not possible to conclusively establish whether Pegasus was deployed against Gandhi,” said news portal The Wire, which is part of the Pegasus Project.

Congress leader Rahul Gandhi took a swipe at the PM on the matter, using the hashtag “Pegasus”. Mr Gandhi tweeted: “We know what he’s been reading -- everything on your phone”.

Said Mr Shashi Tharoor: “What Rahul Gandhi and Prashant Kishor are thinking or what journalists are thinking when they interview politicians has nothing to do with national security.”

Leader of the Opposition in the Rajya Sabha Mallikarjun Kharge said: “Is it because Mr Gandhi raises the voice of the poor (that) he is being targeted? Has he done something anti-national?”

Reacting to the explosive news report, AICC general secretary Randeep Singh Surjewala said: “The person responsible for it is none less than the home minister of India, Shri Amit Shah. Of course, it could not be done without the consent and concurrence of the Prime Minister, Shri Narendra Modi. This is an unforgivable sacrilege and negation of the constitutional oath by the home minister and the Prime Minister.”

Mr Surjewala accused the Modi government of compromising national security, saying: “The government has betrayed the country. This is an act of treason. The BJP’s name should be changed to Bhartiya Jasoos Party.” The Opposition plans to corner the government on this issue in both Houses in the coming days.

The Wire report said that top virologist Gagandeep Kang was a possible target of surveillance in 2018, while tackling the Nipah infection, and the family members of a woman who in 2019 accused then Chief Justice of India Ranjan Gogoi of sexual harassment were also potentially targeted. Among the other names mentioned in the list are that of Ashok Lavasa, former election commissioner, and several Indian journalists.

The Wire report added that the Pegasus targets included two current Union ministers -- Prahlad Patel and Ashwini Vaishnaw -- and the leaked list had phone numbers not just of Mr Patel and his wife but 15 people linked to him, including his cook and gardener.