As the Opposition members continued their uproar, Mr Modi laid the list of the newly inducted ministers on the table of the House 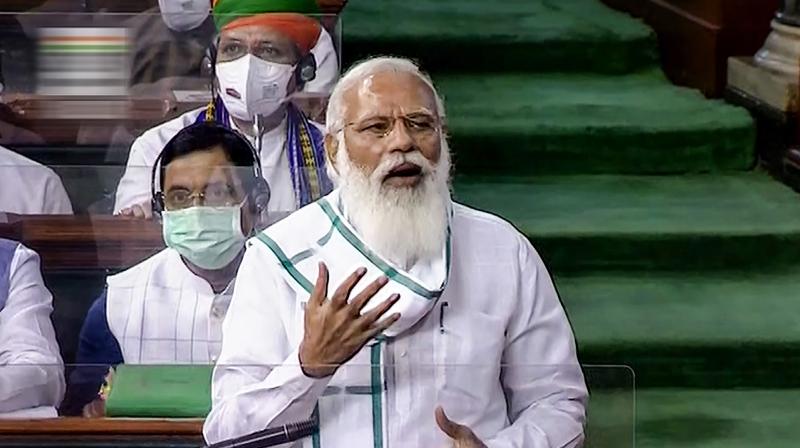 Prime Minister Narendra Modi speaks in the Lok Sabha, on the first day of the Monsoon Session of Parliament, in New Delhi, Monday, July 19, 2021. (LSTV/PTI Photo)

New Delhi: Opposition members forced several adjournments on the first day of the Monsoon Session in both Houses as they demanded that the several adjournment motions given by them should be taken up. The Opposition started raising slogans as Rajya Sabha Chairman M. Venkaiah Naidu was making his opening remarks on the expectations from this session amid the Covid pandemic. Amid sloganeering, the Chair asked Prime Minister Narendra Modi to introduce the newly inducted ministers to the House.

Expressing anguish over the conduct of the Opposition members, Mr Modi questioned their “mentality” behind not allowing him to introduce the women, dalit and Scheduled Tribe MPs who were made ministers. Mr Modi said when the new Union ministers from a rural background and the children of farmers were being introduced to the House, some Opposition members were not happy. He said any women, Dalit and Scheduled Tribe MPs have been made Union ministers, but some of the Opposition members did not want to hear their names and give them due honour. “What is this mentality? he wondered.

The PM further said it was for the first time that the House was seeing “such a mentality”. As the Opposition members continued their uproar, Mr Modi laid the list of the newly inducted ministers on the table of the House. The Rajya Sabha’s new Leader of the House, Mr Piyush Goyal, called it an “unfortunate” situation. Defence minister Rajnath Singh said: “Healthy traditions in the House have been set by following conventions. I have been in the House for the last 24 years and have not seen such an incident where the PM could not introduce his council of ministers, even if it is one minister. It is sad, unfortunate, unhealthy.”

However, despite what the PM said, in 2004 then PM Manmohan Singh could not introduce the ministers in his Cabinet in Parliament as the BJP protested against the inclusion of late Mohammed Taslimuddin and Lalu Prasad Yadav in the council of ministers. Congress MP Manickam Tagore also said there was a second incident in 2013 when Dr Singh was not allowed to introduce his ministers in the House. “So the BJP cannot say that this has never happened before,” said Mr Tagore.

Earlier on Monday, while talking to reporters before the session started, Prime Minster Modi urged MPs and political parties to ask the “sharpest and toughest of questions to the government” but asserted that the government should also be allowed to respond to them.

Mr Modi said he has urged all floor leaders to take some time out on Tuesday evening when he would like to give them detailed information on the Covid-19 pandemic. “We want discussion inside Parliament as well as outside it with the floor leaders on the Covid pandemic,” he said.

“I urge all MPs and political parties to ask the sharpest and the toughest of questions but they should also allow the government to respond in a cordial environment as democracy is strengthened by conveying the truth to the people,” Mr Modi said.