India   All India  20 Aug 2017  Repair work without permission may be reason for train mishap; Railways to probe
India, All India

Repair work without permission may be reason for train mishap; Railways to probe

A probe will ascertain if work was being carried out on the tracks and if so, whether the rules had been followed. 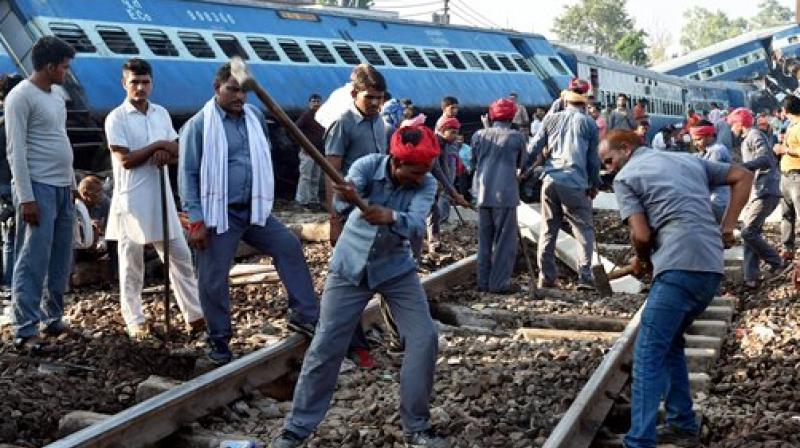 New Delhi: The railways on Sunday indicated negligence could be the reason behind the derailment of the Utkal Express which killed 23 people and injured 156 others, with a senior official saying a probe would ascertain if any maintenance work was being done on the tracks without permission.

It was not "clear" what kind of work was going on at the site, said Mohd Jamshed, Member, Traffic, Railways.

"However, any work on tracks has to follow a manual. We have maintenance manuals which lay down guidelines for work on any kind of railway infrastructure," he told the media here.

A probe will ascertain if work was being carried out on the tracks and if so, whether the rules had been followed.

The probe, which will begin on Monday, will be conducted by the Commissioner, Railway Safety, Shailesh Kumar Pathak, who will look into "every angle, be it sabotage, technical lapse or manual fault".

Jamshed, who visited the spot in Khatauli where the accident occurred on Saturday, killing 23 people, said he had seen maintenance tools on the tracks.

"There is some audio clip of some conversation that we will probe. Also, when we did the site inspection, we saw some equipment the railways use for track repair present there." he said.

"Whenever this kind of a big accident happens, coaches get smashed, toppled, capsized and derailed. In this case, a 200-metre track has been damaged completely. It has to be investigated in detail. All measurements are being taken and every lapse is being taken into account," Jamshed said.

The senior officer also said the Railway Police had lodged an FIR in the case at Khatauli under Sections that included mischief causing destruction of railway property, causing death by negligence, causing grievous hurt, endangering life and personal safety.

Read: Won't allow laxity in ops by Railway Board: Suresh Prabhu on UP train derailment

"Fixed infrastructure on which the rail network runs like tracks, overhead equipment and signals are regularly maintained as per schedule. Maintenance of tracks is done during operations by blocking them as per requirement, according to fixed time and schedule. Written permission needs to be taken for this work," he said.

He also said sometimes repair needs to be done on an emergency basis, but even then, if the next station is informed, the consequent trains are stopped.

"Then we get our supervisors on the track which is inspected and repaired after which the trains are allowed to run with a speed restriction. Red flags are also shown to trains in case there is a problem on the tracks," he said.

He said it would be investigated if these protocols were followed this time.

"Prima facie the information is that there is divisional responsibility involved if work was being done without seeking permission. By this evening we will know if any of our staff was responsible for this," he said.