The BJP hit back at Robert Vadra, saying his comments showed the restlessness in the Gandhi family to claim power. 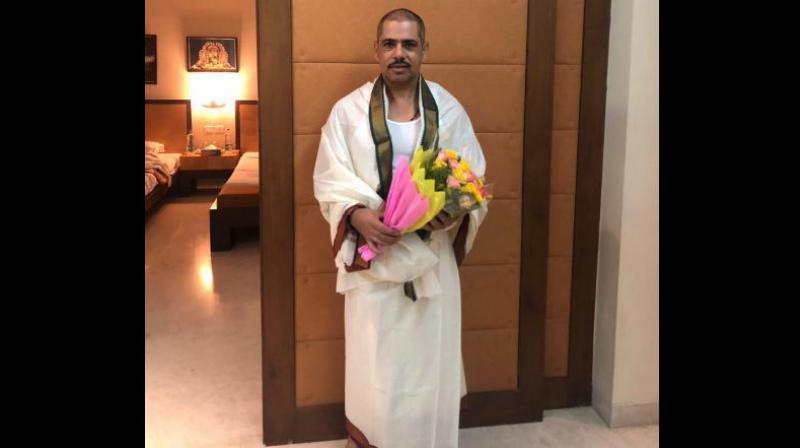 Robert Vadra, who is on a spiritual quest across the country, visited the Tirupati temple in Andhra Pradesh on Sunday morning and posted a message along with his photographs on Facebook. (Photo: Facebook | Robert Vadra)

New Delhi: The country needs a change and that change will come, as my family and Rahul Gandhi are working very hard for it, Sonia Gandhi's son-in-law Robert Vadra said on Sunday.

He said the people of India have suffered a lot, but did not elaborate what he meant by that.

Vadra, who is on a spiritual quest across the country, visited the Tirupati temple in Andhra Pradesh on Sunday morning and posted a message along with his photographs on Facebook.

"I think the people want the change and I can see that they have suffered a lot and we all need to be secular, most important for our country. We are here with the people of India and we will all struggle for them and do our best," he told reporters after "darshan" at Tirupati temple.

"I had a very good darshan. I felt the energy and take it back for my family, my children and, for my mother-in-law, for their good health, happiness and for all the people in our country to have happiness, peace and harmony," he said.

Vadra said, "we are all going through a lot of change, but all we should feel is love and affection and I feel that I am blessed. I want to take this energy and spread it around".

"Blessed to visit Tirupati and Tirumala Venketaswara Temple on my spiritual Journey," he said in the Facebook post.

He said one can only understand the devotion of people visiting Tirupati, when that person makes the effort to visit as many historical temples and follows their rituals.

He initially prayed at Shri Padmavati Ammavaru Temple (Lakshmi ji) and then ascended to Tirumala, but waited till 2 am for the darshan called "Suprabhatam".

The BJP hit back at Vadra, saying his comments showed the restlessness in the Gandhi family to claim power.

When asked about the comments, BJP spokesperson Sambit Patra said, "So finally, it is from Mr Robert Vadra that the country is to get sermons on governance".

"This country belongs to the people of India and this is the reason as to why through democratic means, and not through dynastic means, that the governance agenda would be furthered," he said.