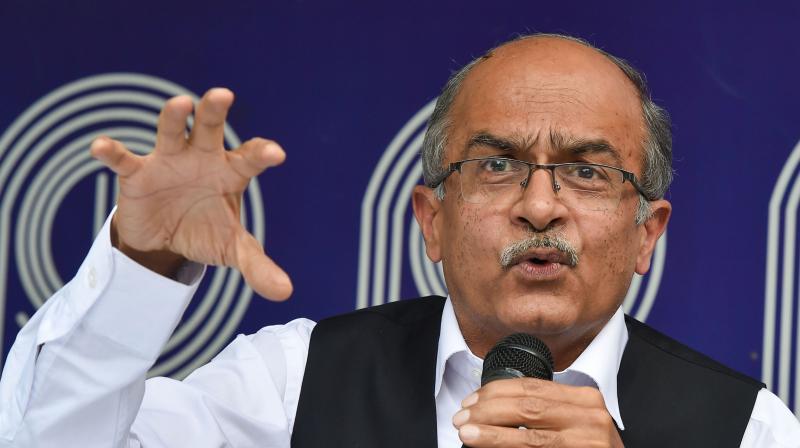 The Supreme Court Thursday granted two days to activist-lawyer Prashant Bhushan, who has been held guilty of contempt, to reconsider his 'defiant statement' refusing to apologise for his contemptuous tweets against the judiciary.

Bhushan told a bench headed by Justice Arun Mishra that he would consult his lawyers and think over the apex court's suggestion.

Attorney General K K Venugopal urged the bench, also comprising Justices B R Gavai and Krishna Murari, not to award any punishment to Bhushan in the contempt case saying he has already been convicted.

The bench said it cannot consider the request of Venugopal unless Bhushan reconsiders his earlier stand of not apologising for his tweets. The tone, tenor and content of Bhushan's statement makes it worse; is it defence or aggravation, the court told Venugopal.

The top court said it can be very lenient if there is realisation of mistake, and posted the matter for further hearing on August 24.

Earlier in the day, the Supreme Court rejected Bhushan's submission that the arguments on quantum of sentence in the contempt proceedings in which he has been held guilty be heard by another top court bench.

A bench gave assurance to Bhushan that no punishment will be acted upon till his review against the order convicting him in the case will be decided.

The bench told senior advocate Dushyant Dave, representing Bhushan, that he is asking them to commit an "act of impropriety" by saying that argument on sentencing be heard by another bench.

The top court on August 14 held Bhushan guilty of criminal contempt for his derogatory tweets against the judiciary, saying they cannot be said to be a fair criticism of the functioning of the judiciary made in the public interest.

In a significant development, the Bar Association of India (BAI) has come out in support of the activist-lawyer, convicted for cntempt of court, saying that at a time the citizenry is facing huge challenges, the stature of the Supreme Court would stand enhanced by allowing criticism rather than taking umbrage at his remarks.

The Executive Committee of the BAI said it was deeply dismayed and concerned by the manner of exercise of suo motu contempt jurisdiction by the Supreme Court of India against a member of the legal profession in the case relating to Bhushan.

The BAI, in a statement said, it was of the view that the exercise of contempt jurisdiction by the court in this manner has potential for more self-harm than the avowed purpose of safeguarding the prestige of the institution.

Trenchant criticism, commentary, satire and humour help build institutions in a free society. Judgments that curb the exercise of freedom of speech and expression by a member of the Bar by resort to suo motu powers is conspicuously old fashioned.

The reputation of the Supreme Court of India cannot be dislodged by a couple of 'tweets'. At a time that the citizenry is facing huge challenges, the stature of the Supreme Court would stand enhanced by allowing criticism rather than taking umbrage at such remarks, it said.