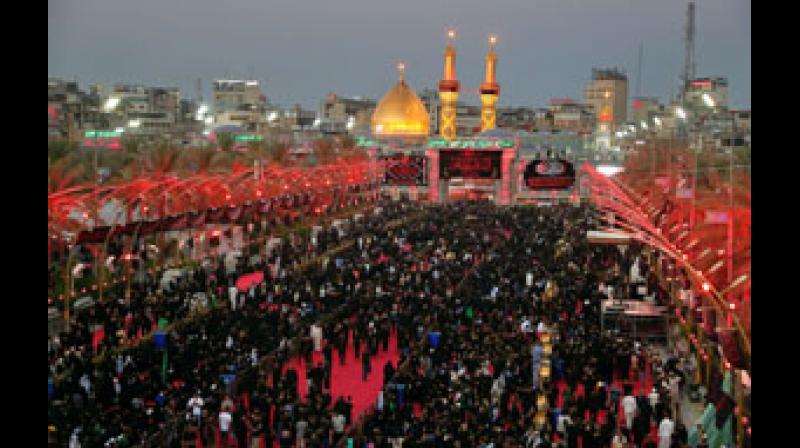 Shiite Muslim worshippers gather around the shrine of Imam Abbas during a Muharram procession in Karbala, Iraq, Wednesday, Aug. 18, 2021. Muharram, the first month of the Islamic calendar, is a month of mourning for Shiites in remembrance of the death of Hussein, the grandson of the Prophet Muhammad, at the Battle of Karbala in present-day Iraq in the 7th century. — AP/PTI

SRINAGAR: Srinagar’s uptown Aabi Guzar area was under a security clampdown on Thursday whereas hundreds of policemen and Central armed police force personnel in riot gear were out on the streets elsewhere in Kashmir’s main town to hold back Zuljinah procession along the traditional route to mark Yoam-e-Ashoor or the anniversary of the martyrdom of Prophet Muhammad’s grandson Imam Hussein and his 72 family members and companions in the battle of Karbala (Iraq) in 680 AD.

However, Zuljinah and tazia processions and ‘sham-e-garibaan’ rallies were permitted in predominantly Shia areas of Srinagar including Zadibal and in the towns of Magam and Budgam and at several other places in the Valley. Tens of thousands of mourners participated in these events and no untoward incident was reported from anywhere, the police officials said.

Thousands of Shia mourners turned up for Zuljinah processions in Kargl town of Ladakh and J&K’s winter capital Jammu whereas comparatively smaller rallies were held at many places in Leh district of Ladakh, across Kashmir Valley and Jammu region, reports received here said.

On Tuesday, the police had fired teargas canisters and used bamboo sticks to break up small groups of Shia mourners who made repeated attempts to converge in Srinagar’s Shaheed Gunj area for taking out a combined tazia or mourning procession on the eighth day of Muharram. Subsequently, about 600 mourners, some of them in injured condition, were detained by the police. While most others were freed the same evening or next day, eight persons have reportedly been booked under relevant provisions of law for chanting pro-freedom slogans while marching along a street at Aabi Guzar.

Media persons covering such a face-off at City’s Jehangir Chowk intersection were also thrashed and the equipment of a couple of them damaged by the policemen. Nine police officials have since been removed from the postings they held on that day and transferred out of the area over what DGP Dilbag Singh termed as “undesirable behaviour”.

Inspector General of Police, Vijay Kumar, had sought to justify the curbs and police actions against the Shia mourners saying, “We respect the religious sentiments and practices of all but, at the same time, it is also our joint responsibility to defeat the ill designs of vested interests who try to disturb the peaceful atmosphere".

Since 1989, when the Kashmiri separatist campaign turned violent, mourning processions by Shia Muslims have been disallowed along traditional routes in Srinagar, mainly on the eighth and tenth of Muharram, the first month in Islamic calendar. However, tazia processions to commemorate the martyrdom of Imam Hussain and others at Karbala are with certain restrictions allowed in the areas having sizable Shia population in and outside Srinagar.

Prior to the outbreak of insurgency, Srinagar's Shia residents used to take out processions from Abi Guzar in Kothibagh and Guru Bazaar in Shaheed Gunj police station areas of the City which would culminate into Hussaini majalis or gatherings at Zadibal and Dalgate in Ram Munshi Bagh areas to mark the 10th and 8th day of Muharram mourning, respectively. However, main tazia processions were later banned as the authorities feared that such public marches and events could be turned into massive pro-azadi rallies which may create law and order situations.

Like last year, certain additional restraints on such gatherings were ordered by the authorities in view of the COVID pandemic. However, at places the coronavirus SOPs and guidelines were hardly adhered to by the majority of mourners. At Zadibal, policemen were seen offering the mourners.