India   All India  20 Sep 2017  BSF seals Indo-Bangla border, steps up vigil in the wake of Rohingya crisis
India, All India

BSF seals Indo-Bangla border, steps up vigil in the wake of Rohingya crisis

According to a data of the BSF, the force apprehended 175 Rohingyas along the Indo-Bangla border in between 2013 and 2017 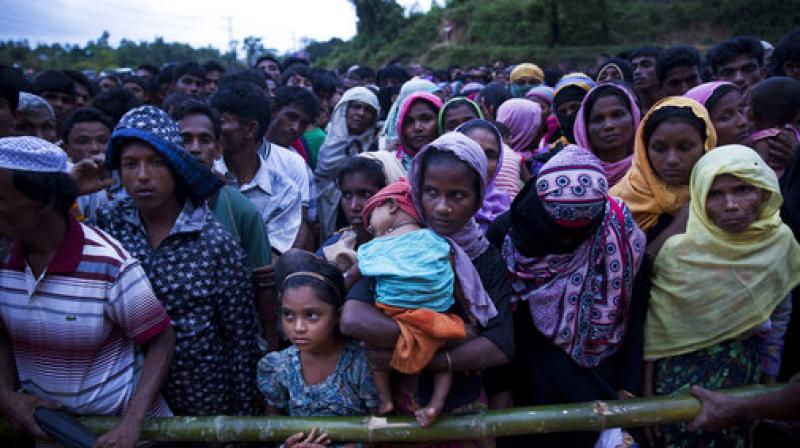 Rohingya Muslims, who crossed over recently from Myanmar into Bangladesh, stand in queues to receive food being distributed near Balukhali refugee camp in Cox's Bazar, Bangladesh. (Photo: AP)

Kolkata: The Border Security Force (BSF) has sealed the Indo-Bangla border and stepped up its vigil alongwith redeploying its assets in wake of the Centre's decision to not to provide asylum to the Rohingyas to India. BSF additional director general (Eastern Command) R P Singh informed about the move on Wednesday.

He was speaking on the sidelines of the Curtain Raiser of BSF Half Marathon-- 2017 attended by former Indian football team captain Bhaichung Bhutia. The half marathon will be organised by the BSF South Bengal Frontier in the memory of the martyrs on October 29 in Kolkata.

Asked about the challenges steps taken Singh said, "For us, infiltrators are infiltrators irrespective of their background. Our international border is sacrosanct. Our job is to guard the border against infiltration. We have stepped up our vigil in anticipation that the people might cross over to our side. We have alerted troops and mobilised our resources. They have been deployed more meaningfully."

Singh added, "We have faced no problem so far. We have fully sealed the Indo-Bangla border of around 4,600 km guarded by 85,000 personnel which is adequate also. We have redeployed our assets depending upon the threat perception and other issues in those areas where our strength was less. We believe that there would be no problem in future."

According to a data of the BSF, the force apprehended 175 Rohingyas along the Indo-Bangla border in between 2013 and 2017 and they have been booked in 37 cases in total. In 2013 the number of apprehension was the highest at 108 against whom 14 cases were initiated, the statistics shows adding that the number however drastically decreased to 12 who with two cases against them.

In 2015, the number of apprehension again shot up to 22 who were booked in six cases. Last year the figure further rose to 26 who were booked in 11 cases. This year seven Rohingyas were caught so far, the data said. Sources in the BSF revealed that the current year's apprehension figure was recorded much before the Rohingya crisis began in Myanmar.