How India, China perform would basically shape the world: Rahul

Rahul was interacting with students at Princeton University noted that there was ‘a lot of synergy’ between India and US. 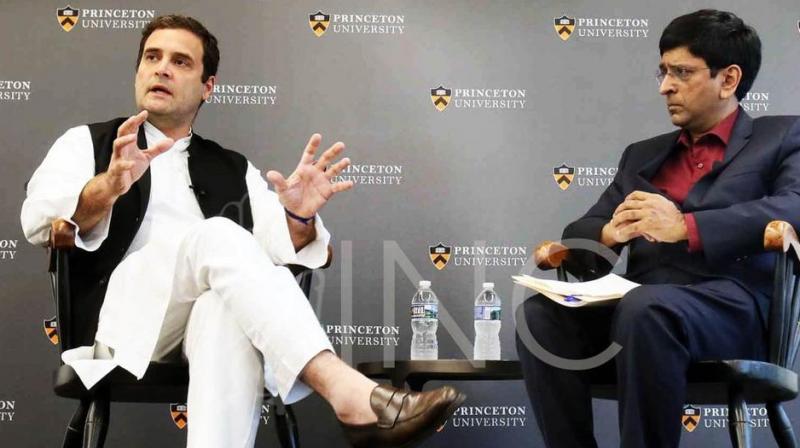 It's not my place to say that China should be democratic or not. They have chosen their path and we have chosen ours, says Rahul Gandhi. (Photo: Twitter/INCIndia)

Princeton: Congress vice president Rahul Gandhi said on Wednesday that notwithstanding the path chosen by them, the performance of India and China, would determine how the world would fundamentally be reshaped.

Gandhi, who was interacting with students at the Princeton University noted that there was “a lot of synergy” between India and the United States.

“There are two large migrations taking place - one is completely free and the other is centrally controlled. The systems respond differently. India and China are two huge countries that are transforming from agricultural countries to urban modern model countries. And that’s a huge chunk of the world population,” Gandhi said in his interaction at the Princeton University.

“And how these two countries do is going to fundamentally reshape the world. It’s not my place to say that China should be democratic or not. They have chosen their path and we have chosen ours,” he said.

But there is “cooperation and there is competition” between the two most populous countries of the world. We have to figure out how to get our jobs. We have to basically compete with China,” said adding that frankly India is not doing that well.

China, he said, is entering spaces with One Belt, One Road (OBOR) venture.

“And China has a particular vision of the world. It’s very clear. And from their perspective it’s a very powerful vision,” he said.

Gandhi also raised a series of questions for India that he sought to be answered.

“Does India have a similar vision? What does that vision look like? How much cooperation is going to be between us and them? These are basically the fundamental questions going forward. But the thing to realise is that China is moving with tremendous power and we have to work with that,” he said.

Gandhi said there’s a lot of space for cooperation between the United States and India in the creation of jobs and in the education sector.

The scion of the Nehru-Gandhi family underscored the need for a balance (of relationship) in terms of all the other countries.

“But balance is also important in terms of all the other countries. So I would say there is a slight difference between us and the government,” Gandhi said in response to a question.