India   All India  20 Sep 2017  Jawan killed, 3 others wounded in sniper attack across LoC in J&K
India, All India

Jawan killed, 3 others wounded in sniper attack across LoC in J&K 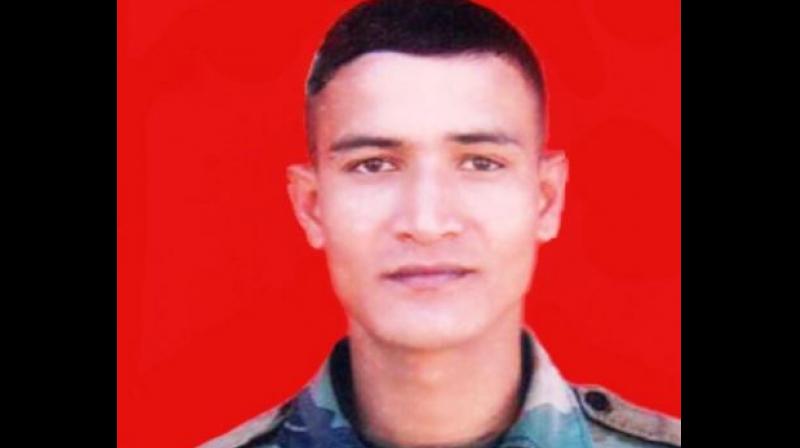 Photo of Army Sepoy Rajesh Khatri who lost his life in ceasefire violation by Pakistan in Keran sector. (Photo: ANI)

Srinagar: An Army jawan was killed and three others were wounded in sniper attack from across the Line of Control (LoC) in Jammu and Kashmir’s Kupwara district on Wednesday.

The Army officials here said that Pakistani troops targeted the Indian soldiers deployed at their ‘Pimple Post’ in Kupwara’s Keran sector earlier during the day, injuring four jawans of 5/9 GR unit of the Indian Army. They were airlifted to Srinagar and admitted to the Army’s 92-Base Hospital at Badami Bagh Cantonment where one of them identified as Rajesh Khatri was declared dead on arrival. The condition of another soldier is stated to be critical.

The Army sources said that it was a sniper attack carried out from across the de facto border as the area was calm till this incident took place. However, after the incident, the facing armies exchanged small arms for some time in this sector, the sources said.

A defence spokesman here added that the “unprovoked action” by the Pakistani troops in violation of the November 2003 ceasefire agreement leaving one jawan dead and three others wounded evoked “necessary and adequate” response from the Indian troops.

However, it is not yet know if the Pakistani troops suffered any casualties in the Indian “retaliatory action.”

On September 15, a Border Security Force (BSF) constable Bijender Bahadur was killed in the firing by Pakistan Rangers in Arnia sector along the International Border (IB) in Jammu district of the State.

Earlier the LoC in neighbouring Poonch and Rajouri districts witnessed repeated ceasefire violations by the Pakistan troops for days. The Indian officials had said on last Thursday that two Pakistani soldiers were killed in retaliatory action by the BSF earlier during the day.

They said the action came after three Indian jawans were injured in “unprovoked” firing and shelling by Pakistani troops along the IB and the LoC in Jammu and Poonch districts on September 14.

However, Pakistan had denied the charge and accused the Indian troops of initiating firing but along the LoC and the IB called ‘Working Boundary’ by it.

India’s Deputy High Commissioner, J. P. Singh, was summoned to Foreign Office in Islamabad by Pakistan’s Director General (South Asia and SAARC), Dr. Mohammad Faisal, over alleged “ceasefire violations” by Indian troops along the LoC which had resulted in the killing of two civilians.

The firing, he was told, took place in Phulian sector on the Pakistani side of the de facto border and that also three persons including a woman were injured.

Islamabad accused the Indian troops of “deliberately targeting” civilians and termed it “deplorable and contrary to human dignity and international human rights and humanitarian laws.” It urged India to respect the 2003 ceasefire agreement and investigate various incidents that have taken along the LoC.

But India has strongly denied Pakistani allegations and said that the incidents of ceasefire violations by Pakistani troops have increased sharply this year. The officials said that till August 1, there have been 285 such actions by the Pakistan army, while in 2016, the number was significantly less at 228 for the entire year.

On the other hand, Pakistan has claimed that there have more than 700 ceasefire violations by the Indian troops this year, which resulted in the killing of 32 civilians on their side of the LoC.