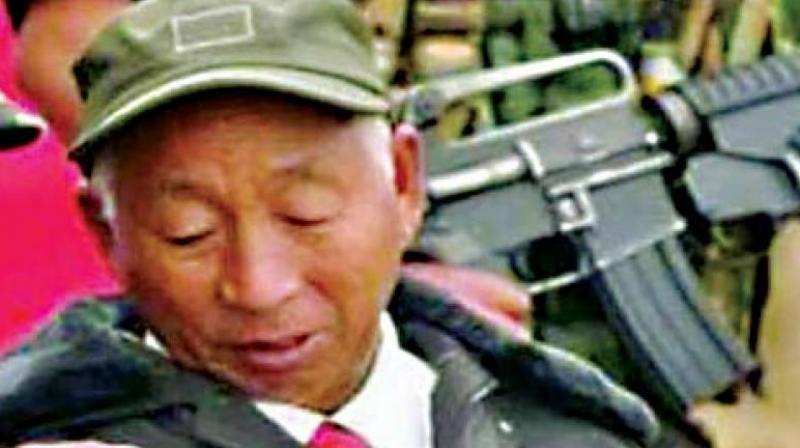 After the demise of S.S. Khaplang, the northeast insurgent groups are increasingly finding it difficult to sustain their armed struggle from Myanmar in northeastern states.

Guwahati: After the demise of S.S. Khaplang, the northeast insurgent groups are increasingly finding it difficult to sustain their armed struggle from Myanmar in northeastern states.

Informing that Indian security agencies are keeping a close watch on the developments in the neighbouring country, authoritative security sources told this newspaper that Khaplang, a Hemi Naga of Myanmar origin, commanded tremendous respect among the tribal village heads of the area adjoining the international border with India. The Northeast insurgent groups have been crossing through these frontier villages only with the written permission of village heads, which was facilitated by the NSCN (K).

Pointing out that since veteran separatist Naga leader Khango Konyak of Indian origin has taken over the NSCN (K), there have been reports of increasing resistance in the frontier villages. Security sources said that comfort level of Northeast insurgent groups have come down after the demise of Khaplang.

Konyak, who held the rank of “lieutenant general” in the Naga Army — the armed wing of the NSCN-K — was elected as vice-chairman of NSCN-K in May 2011. He had undergone guerrilla warfare training in East Pakistan (now Bangladesh) and in China. After the demise of Khaplang, Konyak has taken over as the new chief of NSCN (K). Security sources said that Konyak being a Naga of Indian origin may not be able to influence the village heads as effectively as Khaplang had been managing. Pointing out that security forces had specific input about the presence of nearly 2,000 armed cadres of Northeast insurgent groups in Myanmar, security sources said that they had the information about the presence of nearly 200 cadres of Ulfa (I), which includes new recruits and 150 cadres of anti-talk faction of NDFB in Myanmar.

The NSCN (K) had an army of nearly 800 cadres, security sources said, adding that highest number is of Manipur rebel groups.

Security sources said that most of the Northeast insurgent groups, including Ulfa (I), is facing serious financial crunch and they are also trying to step up extortion. Referring certain instances when extortion demand of Ulfa (I) and NDFB was turned down, security sources said that there has been continuous attempt to extort money from businessmen and corporate houses but in majority of cases, it has failed to materialise as people have started ignoring such threat calls of insurgent groups.