Naqvi mocked Rahul saying that tolerance is in DNA of the nation and is an integral part of Indian history and culture. 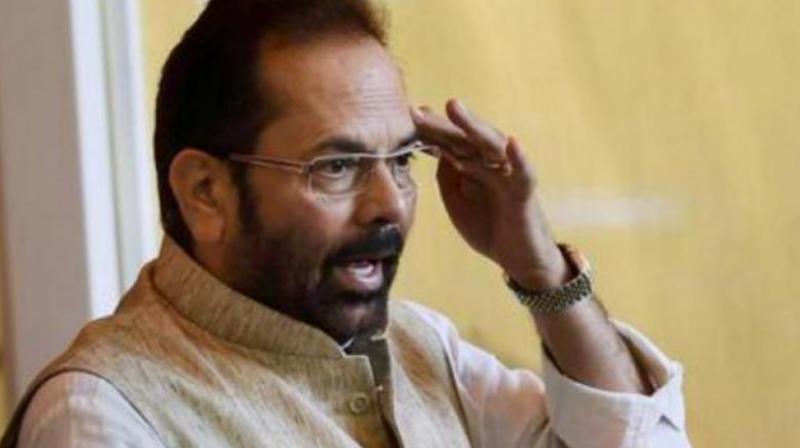 Naqvi's statement came in light of Rahul's address at the Princeton University, New Jersey in United States, where he said that intolerance and unemployment are the key issues that pose a serious challenge to India’s national security and development. (Photo: File)

New Delhi: Branding the Congress with another acronym PPT - 'Political Pakhand ke Tattu', Union Minister Mukhtar Abbas Naqvi on Wednesday slammed the party vice-president, Rahul Gandhi, for referring to intolerance as a challenge in the country and said that he is unaware of the culture of the Indian society and hence, makes such remarks.

Naqvi's statement came in light of Rahul's address at the Princeton University, New Jersey in United States, where he said that intolerance and unemployment are the key issues that pose a serious challenge to India’s national security and development.

Naqvi mocked Rahul saying that tolerance is in DNA of the nation and is an integral part of Indian history and culture.

“I think Congress has become PPT- ‘Political Pakhand ke Tattu’, whose CEO is Rahul Gandhi. Few people are ignorant, not well aware of the culture and history of the country, they only makes such kind of statements. Tolerance is in the culture of this nation; it is in the DNA,” Naqvi told ANI.

He said that as far as the question of the development of the nation lies, the country is moving at a fast pace under the guidance of Prime Minister Narendra Modi.

"For the past three years, the country is moving forward under the guidance of Prime Minister Modi, defeating corrupt practices and scams. The people having problem with this are the ones, who believed that scams and corruption are their birth right,” he said.

He further asserted that such statement shows the desperation of the Congress after losing the previous general elections and clearly indicates that they can see their future in dark.

“They are just criticising the development of the country to malign the image of the country at an international level. Polarisation has been witnessed in the country, but for development, to end corrupt practices and against communalism. If this polarisation is not suiting him, then that is not our problem,” he said.

Earlier in the day, Rahul, while addressing students in New Jersey, said that New Delhi needs to work on providing adequate education and health facilities to all its people, irrespective of whether they are rich or poor.

"The central question is how India gives its people jobs. If you, as a modern country, are unable to give your people jobs, it's very difficult to give them a vision. Everyday nearly 30,000 new youngsters come into job market. 450 jobs are being provided today," he said.

"Education and health facilities at the top level are very good, but if you go to a state like Bihar or Uttar Pradesh things don't remain the same. If you are poor, things are not very good for you in India," he added.

He even targetted the Centre over its policies, adding that the politics of polarisation needs to be eradicated from India.

Rahul said that historically, India's strength has always been in its ability to embrace people. "So, if we alienate our own people, it gives the miscreants a chance to play on and aggravate tensions," he said.

"One of the the central challenges in India is the politics of polarisation. Where you pick one community over another, you create spaces for other people to come in. There is a belt of 100 million tribal people who do not feel comfortable with the vision," Rahul added.