Minister of State for Environment said those who were involved in his assault would be 'found out' soon.. 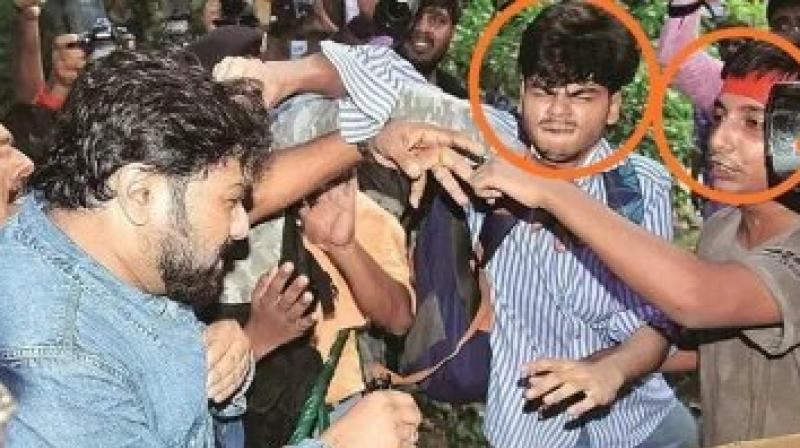 "We shall rehabilitate you mentally so that you & your Hooligan Friends (all footages available with the media) behave like you are supposed to behave as students .. till then," Supriyo said. (Photo: Twitter | SuPriyoBabul)

Kolkata: Describing the students who protested against him at a university here as "cowards and hooligans", Union Minister Babul Supriyo on Friday said that they would not be dealt with in the same manner as they had done, but "rehabilitated mentally" so that they "behave as students".

Posting pictures of his assault at Jadavpur University campus on September 19, Supriyo, Union Minister of State for Environment, said those who were involved in his assault would be "found out" soon.

"These cowards will not be allowed to malign & tarnish the image of #JadavpurUniversity .. U shall be found out by us soon but dont worry, you shall not be treated in the manner you treated me," Supriyo said in a tweet while posting pictures of his assault on Friday afternoon.

"We shall rehabilitate you mentally so that you & your Hooligan Friends (all footages available with the media) behave like you are supposed to behave as students .. till then," he said.

These are self-proclaimed Naxalites.. the one with a red Band and the one with blue stripe shirt - he is the one who can be seen catching hold of my hair.. Check out my reasoning with them and then check their demeanour..

Zeroing in on a picture of a student pulling him by his hair, Supriyo in another tweet, wondered what action would the Mamata Banerjee-led TMC government take against the student for assaulting him (Supriyo) without any provocation.

"This is the guy who led the assault in #JadavpurUniversity .. we will find him out and then see what @MamataOfficial does to him in terms of charging him for assault without ANY PROVOCATION whatsoever from our/my side," he said in a tweet.

Babul Supriyo was on Thursday shown black flags and heckled by a section of students at Jadavpur University, who also stopped him from leaving the campus, prompting West Bengal Governor Jagdeep Dhankhar to rush to the campus.

Supriyo had gone to the university to address a seminar organised by the Akhil Bharatiya Vidyarthi Parishad (ABVP) - the student wing of the RSS.

The governor, who is the chancellor of the university, too faced demonstrations by the students belonging to Left-leaning organisations including SFI and AFSU, naxalite students' wing AISA, besides a few members of the TMCP, university sources said.

The agitating students ended the blockade after the police and the university teachers persuaded them and the governor left the place with the minister in his car.