India   All India  20 Sep 2019  Fresh restrictions in Kashmir Valley in view of Friday
India, All India

Fresh restrictions in Kashmir Valley in view of Friday

Normal life continued to remain affected across the valley for the 47th consecutive day. 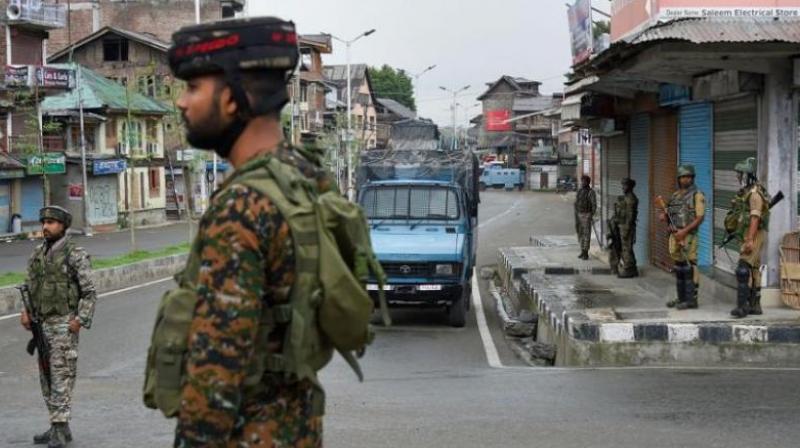 The restrictions have also been imposed in Kupwara and Handwara police districts and the main towns of Ganderbal, Anantnag and Bijbehara, the officials added. (Photo: Representational)

Srinagar: Fresh restrictions were imposed in parts of Kashmir on Friday as a precautionary measure to maintain law and order in view of congregational prayers, officials said.

Normal life continued to remain affected across the valley for the 47th consecutive day with markets closed and public transport off the roads, the officials said.

Restrictions under Section 144 CrPc have been imposed in few areas of the valley to maintain law and order, the officials said.

They said the curbs have been imposed in Nowhatta and adjoining areas in downtown (interior city) and Anchar area of Soura police station in Srinagar.

The restrictions have also been imposed in Kupwara and Handwara police districts and the main towns of Ganderbal, Anantnag and Bijbehara, the officials added.

Security forces have been deployed in strength in vulnerable areas in the rest of the valley, they said.

The officials said the curbs were a precautionary measure to maintain law and order in view of apprehensions that vested interests might exploit the large Friday prayer gatherings at big mosques and shrines to fuel protests.

Friday prayers have not been allowed at any of the major mosques or shrines – including Jamia Masjid in Nowhatta or Dargah Sharief in Hazratbal - in the valley for the past over a month now.

Restrictions were first imposed across Kashmir on August 5 when the Centre announced its decision to abrogate Article 370 of the Constitution and bifurcate the state into two Union territories.

The restrictions were lifted in phases from many parts of the valley. Internet services have remained suspended across all platforms, they said.

While landlines across the valley were functional, voice calls on mobile devices were working only in Kupwara and Handwara police districts of north Kashmir, they added.

The efforts of the state government to open schools have not borne fruit as parents continued to keep children at home due to apprehensions about their safety.

Most of the top-level and second rung mainstream politicians, including three former chief ministers – Farooq Abdullah, Omar Abdullah and Mehbooba Mufti, continued to be in detention or under house arrest.

While NC president Farooq Abdullah was first placed under house arrest, he was on Tuesday booked under the Public Safety Act (PSA).

His son Omar and PDP president Mehbooba Mufti were detained on the night of August 4 -- hours before the Centre announced its decision to abrogate Article 370 of the Constitution and to bifurcate the state into two Union territories.

Most of the mainstream leaders, including former ministers and legislators, were also either detained or kept under house arrest, the officials said.