PM Modi will be honoured for his leadership of the Swachh Bharat Mission (Clean India Mission), which he had launched on October 2, 2014. 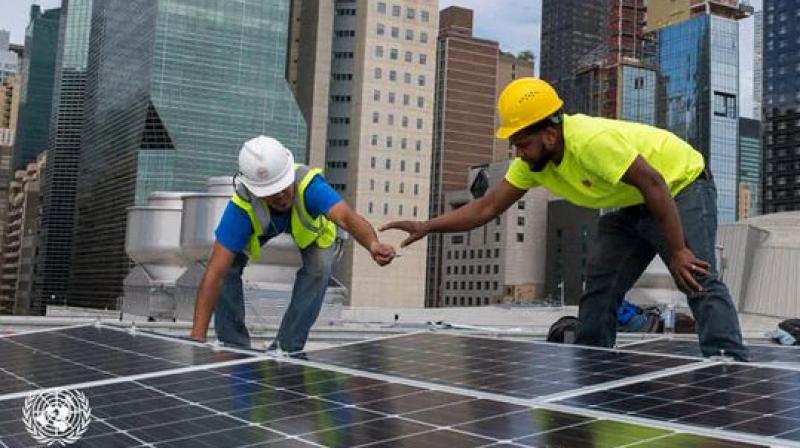 At a contribution of about one million dollars, India has gifted solar panels that have been installed on the roof of the UN Headquarters in New York, one panel each for every 193 UN Member State. (Photo: UN | Twitter)

New Delhi/New York: In a first of its kind symbolic effort by India at the UN, Prime Minister Narendra Modi will inaugurate a 50KW 'Gandhi Solar Park' next week during his visit to the United Nations, a gesture that highlights India's willingness to go beyond the talk on climate change.

At a contribution of about one million dollars, India has gifted solar panels that have been installed on the roof of the UN Headquarters in New York, one panel each for every 193 UN Member State.

PM Modi will remotely inaugurate the solar park at the UN Headquarters and the 'Gandhi Peace Garden' during a special commemorative event on September 24 marking Mahatma Gandhi's 150th birth anniversary. On the occasion, a special UN Postage on Mahatma Gandhi's 150 years will also be released.

A #greenroof is placed next to the new #solarpanels, a gift from #India, on the roof of the @UN. #ClimateAction, #ClimateActionNow, #ClimateSummit pic.twitter.com/dhw9a7jFpO

The 'Gandhi Peace Garden' is an innovative initiative under which the Consulate General of India in New York, Long Island-based NGO Shanti Fund and the State University of New York - Old Westbury have entered into an agreement to plant 150 trees.

India's Permanent Representative to the UN, Ambassador Syed Akbaruddin told reporters on Thursday that the India's engagement during the high-level UN General Assembly session will be action-oriented and with visible outcomes and the Solar Park is an example of that.

"Never has there been a symbolic Indian effort at the UN, of a tangible nature, which impacts on every country of the type that the Gandhi Solar Park is going to be. The UN always talks about renewable energy, it always talks about climate action, climate change. By this small effort that we've made, we symbolise our willingness to go beyond the talk," he said.

The solar panels are powered up to reach the max of 50 KW of generation power. Syed Akbaruddin said energy generated in the park is equivalent to energy that would have been created through use of 30,000 kilograms of coal. It also has a carbon sequestration of 1000 seedlings which will grow into trees over 10 years.

"It is a first attempt. It is an effort where we reflect all 193 countries because there are 193 panels there. Each one for one country, we not only believe in solar power, but we believe in equality too."

Further, in a new element in India's engagement with the UN, Prime Minister Modi will host a special event 'Leadership Matters: Relevance of Gandhi in the Contemporary World' on September 24 in the Economic and Social Council (ECOSOC) Chamber in the UN Headquarters, in commemoration of the 150th anniversary of Mahatma Gandhi.

"For the first time we are having an Indian icon celebrated at the UN. The idea is that to try and contextualise Mahatma Gandhi's approach in a more broad, international context of today. So it will be focused on leadership matters."

UN Secretary General Antonio Guterres, President of South Korea Moon Jae-in, Singapore Prime Minister M Lee Hsien Loong, Bangladesh Prime Minister Sheikh Hasina, Jamaican Prime Minister Andrew Holness and New Zealand Prime Minister Jacinda Ardern will address the special event and speak on their leadership challenges and how in the contemporary world, Mahatma Gandhi's values have inspired each of them in challenges they have faced in their political lives, when they were in office or outside office as leaders.

Akbaruddin said these leaders from diverse geographies will speak on Mahatma Gandhi's leadership and relevance of Gandhian approach and values in the contemporary world. PM Modi will also be presented with the 2019 'Global Goalkeeper Award' by the Bill and Melinda Gates Foundation on September 24.

The honour is a "special recognition" that celebrates a political leader who has "demonstrated their commitment to the Global Goals through impactful work in their country and/or globally."

PM Modi will be honoured for his leadership of the Swachh Bharat Mission (Clean India Mission), which he had launched on October 2, 2014.

The ambitious mission aims to accelerate the efforts to achieve universal sanitation coverage in the country by this year as a tribute to Mahatma Gandhi on his 150th birth anniversary.

So far, 90 million toilets have been built across India to eliminate open defecation by October 2, 2019 and currently 98 per cent of India's villages have rural sanitation coverage instead of 38 per cent five years ago.