The first defence minister to fly onboard “Tejas”, 68 year-old Mr Singh showed no signs of exhaustion, but rather extremely thrilled with the feat. 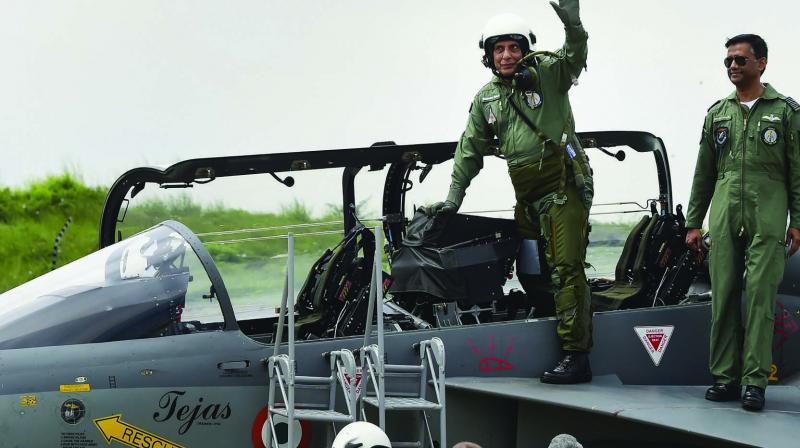 Union defence minister Rajnath Singh waves from atop the Light Combat Aircraft Tejas after a sortie at HAL airport in Bengaluru on Thursday. (Photo: PTI)

BENGALURU: Like Indian air warriors, defence minister Rajnath Singh jockeyed with the controls of the Made-in-India “Tejas” combat jet during a 30-minute sortie with the aircraft cruising almost at supersonic speed over the skies of Bengaluru and neighbouring towns in Tamil Nadu, to prop the morale of defence engineers and scientists involved in its design and manufacture, and the Indian Air Foce (IAF), on Thursday.

The first defence minister to fly onboard “Tejas”, 68 year-old Mr Singh showed no signs of exhaustion, but rather extremely thrilled with the feat.

“This is an indigenous aircraft, so it came naturally to me to fly the ‘Tejas. I wanted to know the conditions under which our pilots fly the aircraft, and I salute their valour. I am proud of this product of the scientists of DRDO, ADA, and HAL, and I congratulate them on the superior skills. It is one of the most memorable events of my life,” he told the media after the sortie.

Commenting on the sortie, he said he took over the controls for a couple of minutes following the instructions of Air Vice Marshal Narmdeshwar Tiwari, the pilot, and even chatting with the latter about his career in the IAF and enquiring about his family. The aircraft took off at a speed less than that of a MiG-21, cruised almost at supersonic swiftness, with the pilot explaining about a ground attack with the help of a laser designator pod fitted on the combat jet.

The defence minister said he is confident that the armed forces will be able to decimate adversaries in the event of a war because of the technological expertise of Indian designers and scientists.