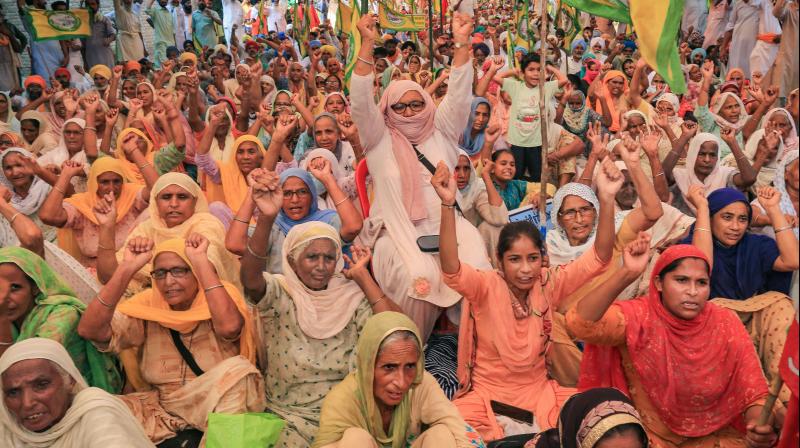 Women raise slogan during a protest against three ordinances passed by the Centre, amid the ongoing coronavirus pandemic, at Badal village in Sri Muktsar Sahib. — PTI

The Congress on Saturday hit out at Prime Minister Narendra Modi and BJP spokespersons over the farmers’ Bills, accusing them of "maliciously" distorting the party's 2019 manifesto which promised creating small markets before repealing the APMC Act.

Ahead of elections last year, the Congress suggested changes to farm laws that would see the Agricultural Market Produce Committees (AMPC) Act abolished. Mr Modi and BJP leaders have accused the Congress of hypocrisy by proposing farm reforms, similar to what one of the Bills proposed by the BJP government does, but resisting it after being voted to the Opposition.

Defending the Congress’ promise of repealing the APMC Act, P. Chidambaram said in a statement, “The Prime Minister and the BJP spokespersons have deliberately and maliciously distorted the Congress manifesto. We promised to promote farmers’, producer companies/organisations to enable farmers to access inputs, technology and markets; and to establish farmers’ markets with adequate infrastructure and support in large villages and small towns… Today, our farmers produce huge surpluses in many agricultural produce — notably wheat and rice. On the strength of our farmers, successive Congress governments built, brick by brick, a food security system, that culminated in the National Food Security Act, 2013.”

“Farmers need multiple accessible markets... Congress’ proposals would have given them that. Once that is accomplished, the Congress manifesto promise on repealing the APMC Act and making trade in agricultural produce free would be a natural sequel in course of time,” he added.

Chidambaram’s statement came a day ahead of the government listing the three farm Bills for consideration and passing in the Upper House on Sunday.