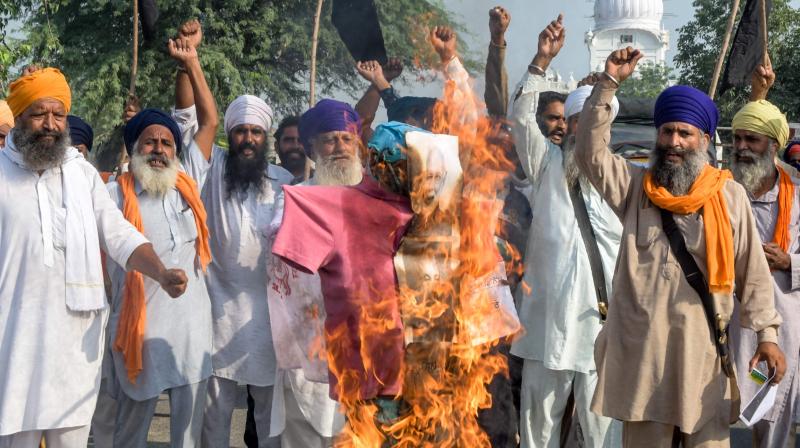 Farmers shout slogans as they burn an effigy of Indian Prime Minister Narendra Modi and Union Agriculture Minister Narendra Singh Tomar, following the passing of agriculture bills in the 'Lok Sabha' (house of representatives), on the outskirts of Amritsar on Sunday. — PTI photo

Prime Minister Narendra Modi on Sunday described the passage of two farm sector bills as a "watershed moment" in the history of Indian agriculture, asserting that they will ensure a complete transformation of the farm sector and empower crores of farmers.

In a series of tweets after Rajya Sabha passed the bills by voice vote amid din created by protesting opposition members, Modi said these proposed laws will liberate farmers from numerous adversities as he noted that peasants were for decades bound by various constraints and bullied by middlemen.

He again assured farmers that the existing government support system for them will continue.

Farmers in states like Punjab and Haryana have been protesting against these bills, with their leaders alleging that the legislations will dismantle the existing system and leave them to the mercy of corporate interests.

Modi asserted, "I said it earlier and I say it once again: System of MSP will remain. Government procurement will continue.

"We are here to serve our farmers. We will do everything possible to support them and ensure a better life for their coming generations."

These bills will add impetus to the efforts to double income of farmers and ensure greater prosperity for them, he said.

"Our agriculture sector is in desperate need of latest technology that assists the industrious farmers. Now, with the passage of the bills, our farmers will have easier access to futuristic technology that will boost production and yield better results. This is a welcome step," the prime minister said.

The two bills were earlier passed by Lok Sabha. After they get the presidential assent, they will be notified as laws.

While major opposition parties are against the bills, the government has been maintaining that the proposed legislations will help small and marginal farmers secure competitive prices for their produce.

"With the passing of two landmark agriculture Bills in Rajya Sabha today, India has cemented the strong foundation for Atmanirbhar Agriculture'," the defence minister tweeted.

"This is the result of endless dedication and determination of the Govt under the leadership of PM Shri @narendramodi," he added.

"After the passage of these two legislators in Parliament, a new history of growth and development in the agricultural sector will be written," he said.

He said the bills will not only strengthen India's food security, but will also prove to be a major effective step towards doubling the income of farmers.

The two bills -- Farmer's Produce Trade and Commerce (Promotion and Facilitation) Bill, 2020, and the Farmers (Empowerment and Protection) Agreement of Price Assurance and Farm Services Bill, 2020 -- were passed by Lok Sabha on Thursday.

The first bill seeks to provide freedom to farmers to sell their produce anywhere in the country.

The second bill is aimed at setting up of a framework under which farmers will be able to engage with agri-business firms, wholesalers, exporters or large retailers for farm services.

"A watershed moment in the history of Indian agriculture! Congratulations to our hardworking farmers on the passage of key bills in Parliament, which will ensure a complete transformation of the agriculture sector as well as empower crores of farmers," Modi added in another tweet.

Meanwhile, SAD chief Sukhbir Singh Badal urged the President not to give assent to farm bills, return them to Parliament for reconsideration.

Farmers at several places in Punjab on Sunday burnt copies of farm bills and effigies of Prime Minister Narendra Modi, alleging that the bills related to the agriculture sector will destroy their livelihood.

The Punjab Youth Congress also started a "tractor rally" from Punjab to Delhi against the three farm bills.

At many places, including Ludhiana, Ferozepur, Sangrur and Barnala, the protesters raised slogans against the BJP-led government at the Centre.

"These farm bills will destroy the farmers and farm labourers and we strongly oppose these bills," a farmer in Talwandi Sabo.

The farmers have expressed apprehensions that the three bills will pave a way for dismantling the minimum support price system, leaving them at the "mercy" of big corporates.

Punjab Youth Congress chief Barinder Singh Dhillon, while speaking to the media in Dera Bassi in Mohali, said this is the beginning of the fight for the rights of farmers.

Punjab Congress chief Sunil Jakhar said all parties, except the Akali Dal and the BJP, are standing with the farmers for their cause.

"After seeing the farmers' anger, Badal had to change his stand on the farm bills issue. Farmers have broken his arrogance," Jakhar said.

Black balloons were also released in the air by activists of the Punjab Youth Congress as a mark of protest against the farm bills.