At Red Fort Ground, as the Prime Minister climbed up the dais and waved at the crowd, chants of “Modi Modi” rent the air. 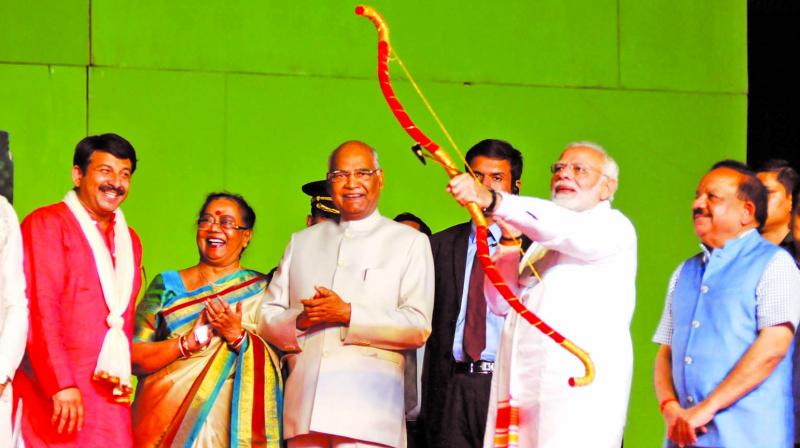 New Delhi: At the Red Fort Ground, Prime Minister Narendra Modi took aim at an effigy of the demon king Ravana with a bow and arrow as a symbolic gesture to end the evil during Dussehra festivities on Friday.

However, there was a slight glitch as the Prime Minister failed to fire on the first attempt as the bow had snapped. The Prime Minister’s second attempt, however, was a success. President Ram Nath Kovind, Union minister Dr Harshvardhan and BJP Delhi unit chief Manoj Tiwari were present at the Red Fort Ground.

While at Red Fort Ground the President and Prime Minister were presented Lord Hanuman’s  gada or mace and Lord Rama’s swords among oth-er mementos, the organisers at Ram Leela ground presented a Ram Charit Manas (epic poem) to the Congress leaders among various other souvenirs.

At Red Fort Ground, as the Prime Minister climbed up the dais and waved at the crowd, chants of “Modi Modi” rent the air. The organisers, while presenting the gada, described the Prime Minister as “Yeh Ram bhi hain, Hanuman bhi hain (He’s Lord Rama and Hanuman).”

Before the Ravana at the Red Fort Ground went up in flames, Mr Kovind made a brief speech. He said, “The festival gives the inspiration to lead an honest life. I want to congratulate the people of the country on the occasion of Vijaydashmi. Vijaydashmi marks the victory of good over evil. The festival encourages good practices in their lives”.

Mr Kovind batted for a cleaner environment and women empowerment in his speech. “One should take care that during celebrations we should be careful that it does not cause inconvenience to others and cause pollution,” Mr Kovind added.

Later the President, Prime Minister and BJP leaders watched the concluding episode of Lord Rama slaying Ravana. Following this, the Prime Minister was presented with a bow and arrow to slay Ravana.