India   All India  20 Nov 2016  Kanpur train accident may be due to 'rail fracture'
India, All India

Kanpur train accident may be due to 'rail fracture'

Had there been stainless steel LHB coaches, then the damage could have been less as these coaches have more in-built safety features. 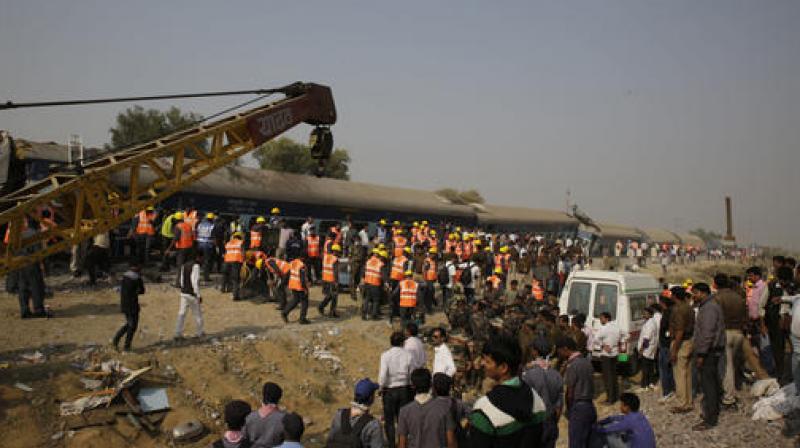 Rescuers work at the site of a train derailment accident in Kanpur Dehat, India, Sunday, Nov. 20, 2016. Many were killed Sunday when 14 coaches of an overnight passenger train rolled off the track. (Photo: AP)

New Delhi: The train tragedy near Kanpur that left over 100 dead could have been caused due to rail fracture, according to sources in the railways.

While the exact cause of the Kanpur accident will be ascertained after the inquiry report, prima facie it indicates towards rail fracture, the sources said.

Casualties also increased due to absence of modern Linke Holfmann Bush (LHB) coaches in the train, the sources added.

Had there been stainless steel LHB coaches, then the damage could have been less as these coaches have more in-built safety features which can absorb shock and impact of derailment more effectively and as a result do not topple, they said.

Read: 107 killed in their sleep as Patna-Indore Express derails at Kanpur

The accident comes at a time when railways are undertaking a massive brainstorming exercise to generate new innovative ideas to improve rail functioning and making the train journey a pleasant experience.

This is the second derailment Saturday at about 2 AM leaving a dozen passengers injured in Rajasthan's Sriganganagar district.

Railway Minister Suresh Prabhu, who has rushed to the site to monitor the situation at ground zero, ordered an inquiry into the accident which will be undertaken by Commissioner Railway Safety (Northern region).

"Inquiry team will start investigation into cause of accident immediately. All necessary assistance provided to the affected, we are taking care," Prabhu has tweeted.

Poor track maintenance including lack of proper fittings and ballast on the railway lines causes fracture on the tracks.

While a simple crack on track may not be of much concern, a severe fracture causing separation of the track could lead to derailment of trains.