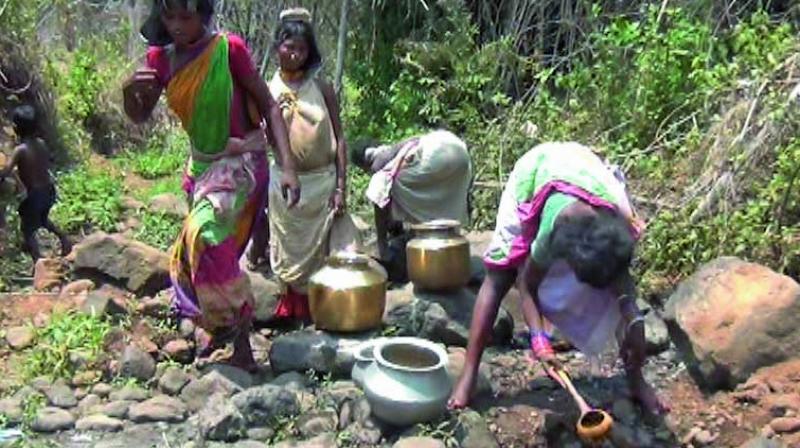 Bhubaneswar: Drinking water supply to people, mostly tribals and dalits, of forest regions and hilly terrains in southern and western Odisha districts, continues to be an uphill task for the state government.

In several pockets, people are seen collecting water from contaminated sources such as rivers, streams and ponds, putting their life to great risk. The worrying fact is “over-exploitation” of natural water sources leads to contamination, resulting in outbreak of diseases such as diarrhoea and cholera and subsequent death of several people every year.

To offset this, earlier in March, the state government admitted that piped water supply projects in around 2,000 villages and small habitations were lying defunct. Of them, 1,345 were identified non-repairable projects.

However, in between, the state government has set up 37,689 piped water supply projects out of 1,56,468 villages and other rural habitations. Similarly, 4,15,558 tube-wells and sanitary wells have also been set up to cater to the needs of the people.

Water conservation activists and social workers said people dig chuha (parched well or   percolation pits) on the river’s bed to collect water in rivers such as Rayagada, Gajapati, Koraput, Nuapada, Kalahandi and Bolangir that don’t carry much water in later part of the winter and summer.

“We do not have any option other than collecting water from unhygienic parched wells, ponds and rivers from. Wild and domestic animals also frequent these places to quench their thirst. As a result, we suffer from various diseases,” Raja Kadraka of Katraguda village under Bissam-Cuttack block in Rayagada district, said.

Kumuti Majhi, a tribal woman of Malipadar village in the district, travels nearly 3 km daily to fetch a bucket of water from a well dug in the neighbouring village. “Our village doesn’t have any dug-well or tube-well. A few years ago, some people had come to our village to dig a well, but returned when we expressed our inability to meet their demands for chicken and other things. We walk down to the neighbouring village to collect water,” she said.

“Women collect water from parched wells, ponds, natural nullahs running through farmlands and rivers during winter and summer months in southern and western Odisha districts. Tribals in villages located on hilltops walk down several kilometres to fetch water from such sources,” S.K. Dalai, a social worker working in Niyamgiri hills in Kalahandi and Rayagada districts, said.

Niranjan Sahoo, executive engineer, Rayagada District Rural Water Supply and Sanitation, said,  “The administration has undertaken construction of intake well, production well, spring collection well, sanitary well and reinforced cement concrete ring well projects to draw water which will be supplied to villagers after due disinfection process. Most of such wells run on solar power to get rid of the electricity constraint.

“Apart from piped water supply through intake well and production well, we are also digging parched wells, sanitary wells to divert water from streams by adopting new technologies. The water goes through strong disinfection process before people use them,” says Mr Sahoo.

Suryanarayan Panda, a social activist working for the tribals in Koraput, Malkangiri and Nabarangpur districts, suggested that the government should start digging sanitary wells in a large-scale under the Mahatma Gandhi National Employment Guarantee Scheme before the summer next year in a bid to ensure that the people do not fall prey to water-borne diseases such as diarrhoea and cholera after using water from contaminated rivers and ponds.