VHP readies for a replay of 1992 in Ayodhya

Motorcycle rallies are being held with volunteers waving saffron flags and chanting “Jai Shri Ram” in all major cities of Uttar Pradesh. 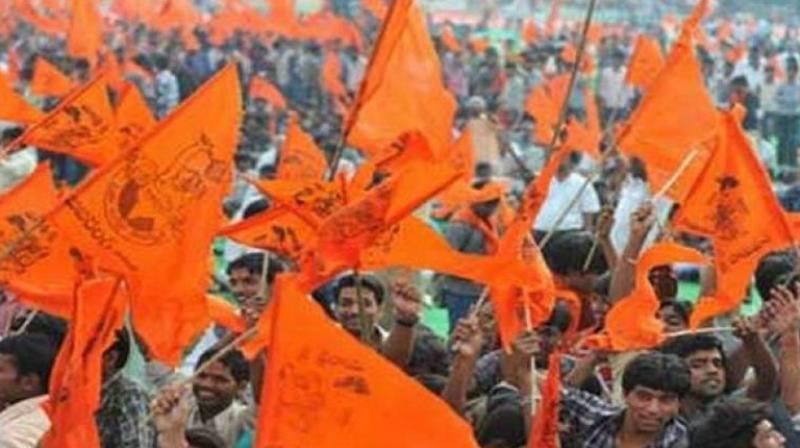 The VHP has already announced that its leaders will meet all 543 members of Parliament and seek their support for the ordinance. (Representational image)

Lucknow: With an obvious eye on the 2019 Lok Sabha polls, the Vishwa Hindu Parishad and other fringe outfits are now trying to generate a Hindutva frenzy on the lines of 1992 on the Ram Mandir issue.

The VHP, with the help of saints and seers, has begun replaying its 1992 strategy to stoke Hindu sentiments even if it means blaming the BJP for the delay in bringing an ordinance. The VHP is distributing lakhs of posters and pamphlets, inviting people for the November 25 “Dharam Sansad”, scheduled to be held simultaneously in Ayodhya, Nagpur and Bengaluru. The VHP has set a target of two lakh participants for the event in Ayodhya.

Ayodhya is already abuzz with activity as Hindu leaders have started arriving and camping in the holy city.VHP volunteers are going from house to house, inviting people to attend the “Dharam Sansad”.

Motorcycle rallies are being held with volunteers waving saffron flags and chanting “Jai Shri Ram” in all major cities of Uttar Pradesh.

A senior VHP leader told this newspaper that the idea was to mount “so much pressure” on the Narendra Modi government and the Opposition parties that an ordinance on the Ram temple is promulgated even before the Winter Session of Parliament.

“We will also corner the Opposition parties and they will have to say whether they favour the Ram temple or not. This time, political leaders will have to take a stand, and if they don’t support the Ram temple, they will be exposed before majority community voters,” the VHP leader said.

The VHP has already announced that its leaders will meet all 543 members of Parliament and seek their support for the ordinance. The VHP also plans to hold meetings in every Lok Sabha constituency in the country over this issue.

BJP leaders, on the other hand, seem confident that the Modi government will bring in legislation in the Winter Session. “We are working on all options and something concrete will come out very soon for the Ram temple. Now everyone wants the construction of the Ram temple to begin,” said UP deputy chief minister Keshav Maurya.

The Hindu movement this time has a new player in Ayodhya — the Shiv Sena — which has given the slogan: “Har Hindu ki yahi pukar, pehle mandir, phir sarkar”.

Shiv Sena chief Uddhav Thackeray plans to be in Ayodhya on November 24 to address a rally the following day. The Sena is all set to take up the Ram temple issue as a major priority.

Iqbal Ansari, a plaintiff in the Babri Masjid title case, said: “The VHP is drumming up a frenzy and that is what is making UP anxious. The matter is sub-judice but the governments are unwilling to stop all this activity, which is a blatant contempt of court. If Muslims are willing to wait for the court verdict, why can’t Hindus? It is obvious they are doing it with an eye on the elections.”