India   All India  20 Nov 2019  Ayodhya judgment a win-win; let’s use it to progress, prosper
India, All India

Ayodhya judgment a win-win; let’s use it to progress, prosper

Thankfully, the Court’s decision has created a win-win situation for both the communities. 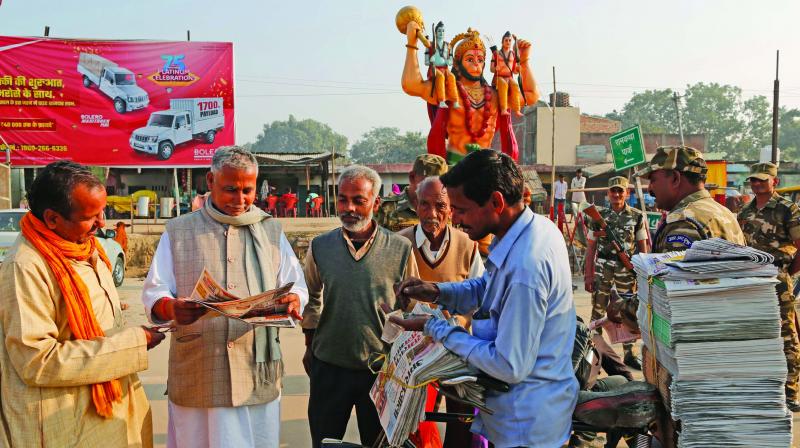 Residents buy newspapers to read about the Supreme Court's verdict in the Ayodhya title suit the morning after the ruling.

Never has the question of communal harmony and social integration in our country raised such a wide range of emotions as the Supreme Court verdict on Ayodhya Ram Temple and Babri Masjid. The vast majority of diverse peoples in the country have welcomed the judgment and would now peacefully bring whatever tasks are on hand to logical fruition. The fact that it has taken us such a long time albeit painful and at times even violent provides a great learning that we the people of India are capable of upholding the spirit of “vasudhaiva kutumbakam” despite the myriad diversity our entire social milieu.

Having been involved with the manifold goals of promoting interfaith dialogue and religious harmony it has been repeatedly demonstrated that humanity has a common origin like the fruits of one tree and the leaves of one branch.

Alas, it is fear, suspicion and hatred externally imposed on the society that provide the fuel and feed the flame of communal disharmony and conflict. Lasting harmony between heterogeneous communities can only come through a recognition of oneness of humankind, a realistion that differences that divide us along ethnic and religious lines have no foundation. Just as there are no boundaries drawn on the earth to separate nations, distinctions of social, economic, ethnic and religious identity imposed by peoples are artificial; they have only benefited those with vested interests. On the other hand, naturally occurring diverse regions of the planet, or the country, such as mountain and plains, each have unique benefits. The diversity created by God has infinite value, while distinctions imposed by man have no substance.

Thankfully, the Court’s decision has created a win-win situation for both the communities. In like manner, let other issues plaguing the nation and preventing the whole country from prospering and progressively evolving be taken up. For, within the people of each ethnic group or culture lies an important piece of the human experience. Each has something to contribute to the larger society. “Consider the flowers in a garden: Though differing in kind, colour, form and shape, yet…this diversity increases their charm, and add to their beauty.” The unity of peoples that our founding leaders, both men and women, worked towards during the struggle to achieve independence should be made a bedrock principle of our education system.  Every child born could become a light to the world and at the same its darkness depending how he or she is nurtured. No child is with any prejudices or tendency for violence; it is the behaviour of adults and immediate environment that moulds the child to think, speak and act in particular ways. If the exposed to negative behaviour and instilled with prejudices than obviously it never learns how to live happily with those who have a different background. On the other hand, if the child is surrounded with positive atmosphere and taught to appreciate diversity and differences as an inherent aspect of the Creator’s cosmic design there would be no difficulty in forging genuine friendships and contributing to the good of all.

It is still not too late, the hope is expressed that India, a confluence of many civilizations and cultures can become a model of communal and religious harmony. Responsibility falls equally on the majority or higher castes who must trade their “sense of superiority” and often “patronising attitude” for “genuine friendship” and “close association”, and minorities, be they religious communities, ethnic groups, or castes, must demonstrate “readiness to forget the past” and eliminate “every trace of suspicion” resulting from a long period of “grievous and slow healing wounds”.

There are so many urgent challenges facing our nation, actually the whole world; we cannot afford to continue “business as usual”. Greta Thunberg made an impassioned and inspired inquiry before world leaders at the United Nations 2019 Climate Summit: “How dare you continue to look away?” In this turbulent period of human history, the world is in need of a unifying vision of our true nature as human beings and of the kind of world in which we would want to live. What else will rescue our country and indeed, the whole world, but efforts of countless people of goodwill who each make the welfare of humanity their principal and dominating concern?

The writer is the secretary and executive trustee, Temple of Understanding India Foundation, and trustee, National Spiritual Assembly of the Baha’is of India and Lotus Temple