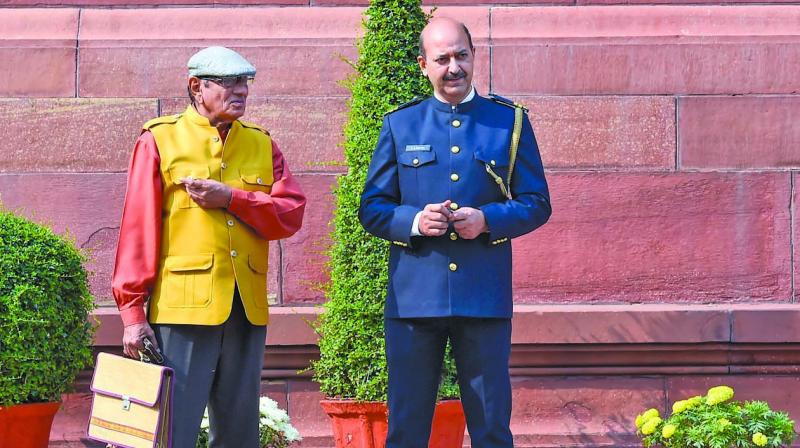 A marshal in the new uniform at Parliament during its ongoing Winter Session in New Delhi on Tuesday. (Photo: PTI)

New Delhi: Facing criticism from some quarters over the new “military uniform” of the Rajya Sabha marshals, Chairman M. Venkaiah Naidu on Tuesday informed the Upper House that the Secretariat has been asked to revisit the change in uniform.

The first day of the winter session of Parliament, which also happened to be the the 250th session of the Upper House, marshals, who assist the Chair during proceedings, wereseen in a new blue uniform instead of the safari suit or bandgalas and the turban.

“...The Secretariat of the Rajya Sabha, after considering the various suggestions, have come out with a new dress code for the marshals. But, we have received some observations by some political as well as some well-meaning people. So, I have decided to ask the secretariat to revisit the same, and then take a conclusive decision,” informed Mr Naidu.

Other than assisting the Chair, two march ahead of the Chairman to announce the commencement of proceedings and also assist the Chair in organising the desk and bringing up order papers.

Congress leader Jairam Ramesh had sought to raise a point on the marshals’ new uniform on the first day but was not allowed by the Chair as the House was taking up obituary references.

The Congress leader however, continued speaking on the issue and insisted that there has been “a very significant change” in their attire. Some former Army officers have also criticised the new uniforms for marshals, terming them as illegal.